'Who does something like that?' mother asks Hannah Cornelius's killers 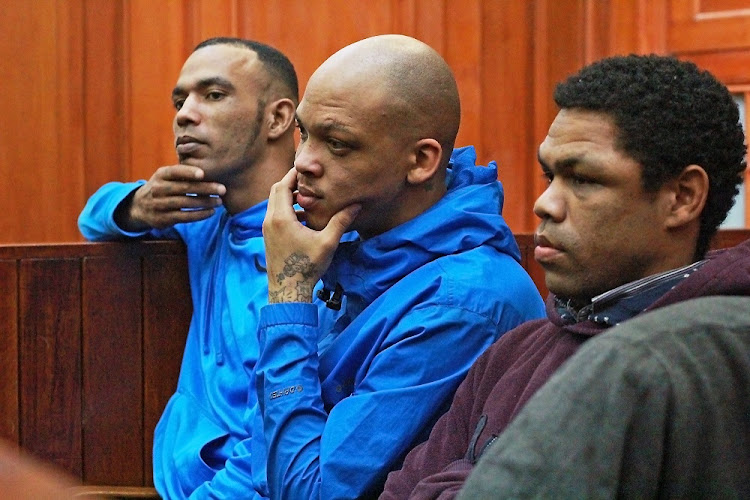 Vernon Witbooi, Geraldo Parsons and Eben van Niekerk in court on judgement day in the murder trial of Hannah Cornelius. The three men have been accused of murdering and raping Cornelius.
Image: Anthony Molyneaux

For some family members it was their first day in court – on what could be the last day of a murder trial that stunned South Africa.

They were also found guilty of the attempted murder of her friend Cheslin Marsh‚ and of robbing and kidnapping two other women in separate incidents‚ Miemie October and Ncumisa Qwina.

Throughout the trial the men laughed as they watched each other testify and gawked at witnesses and journalists.

A fourth man‚ Nashville Julius‚ was found guilty of robbery and kidnapping.

“I feel a bit relieved that it’s sort of over. Without the help of my family and Hannah’s family and people supporting me I don’t think it would have been possible‚” Marsh told Times Select.

From the back of the gallery in the Cape Town High Court‚ Cheslin Marsh watched as Judge Rosheni Allie recounted the facts of the night he lost his ...
News
3 years ago

The first witness to take the stand in the Cape Town High Court on Thursday was Cheslin’s mother‚ Marilyn Marsh.

“Who does something like that to a person? My son did nothing to you‚” she said‚ speaking directly to the convicted men in the dock.

The first thing her son had said to her when she saw him covered in blood at Tygerberg Hospital was‚ “Please tell the police to go look for Hannah‚ they are going to hurt her.”

She stayed with her son for two weeks at the hospital due to the extent of his injuries after the attack.

Willem Cornelius, the father of murdered Hannah Cornelius, testified in the high court in Cape Town on November 8 2018 in the sentencing hearing of the men found guilty of murdering his daughter.