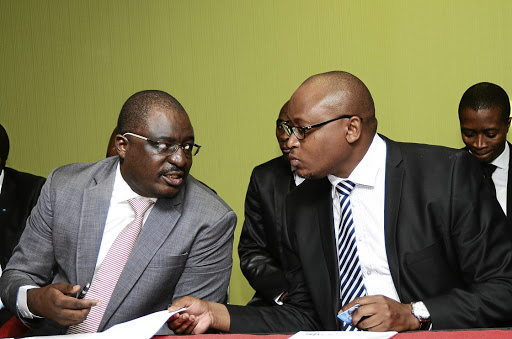 VBS Mutual Bank chairperson Tshifhiwa Matodzi and CEO Andile Ramavhunga. Matodzi has been fingered to be at the centre of the grand scale looting at the bank.
Image: Mduduzi Ndzingi

The explosive findings of a damning report into the failure of VBS Mutual Bank reveals how its architects and accomplices stole a bank.

The report, by investigators appointed by the Reserve Bank to establish what transpired in relation to the failure of VBS, also found that criminal charges must be brought against those responsible.

Following a severe liquidity crisis in March 2018, which led to the Reserve Bank placing VBS under curatorship, Kuben Naidoo, deputy governor of the Reserve Bank and CEO of the Prudential Authority, appointed a team of forensic investigators led by Werksmans Attorneys and advocate Terry Motau to establish what exactly had precipitated the failure.

The investigation enormously benefited from the gathering and securing of evidence by forensic and cyber-forensic investigators assisting Werskmans, which allowed "a regime which properly secured the chain of evidence, of enormous numbers of documents".

This was in part made possible through search-and-seizure operations permitted and executed under the recently adopted Financial Sector Regulation Act.

Over a period of about three weeks in April and May 2018, investigators conducted search-and-seizure operations at VBS offices in Makhado, Sandton and Thohoyandou, as well as the offices of VBS shareholder Vele Investments.

The findings, published in a 148-page report entitled "VBS Mutual Bank - The Great Bank Heist", was released yesterday morning and makes a number of explosive findings, including:

The perpetrators of the heist made away with almost R2bn. "It emerges from the forensic accountants report that an amount of R1.894m was gratuitously received from VBS by some 53 persons of interest, both natural and juristic, over the period March 1 2015 to June 17 2018," wrote the investigators;

The large bulk of the funds stolen was for the benefit of individuals and entities related to VBS executives, including its largest purported shareholder, Vele Investments, which benefited to the tune of R936m;

Tshifhiwa Matodzi, the chair of VBS Mutual Bank and Vele Investments, personally benefited to the tune of R325m. Matodzi, who weeks ago had his estate provisionally sequestrated following an application brought by VBS curator Anoosh Rooplal, is identified as the kingpin of the heist;

A number of other previous VBS executives including Robert Madzonga (R30.3m), Phophi Mukhodobwane (R30.5m) and CEO Andile Ramavhunga (R28.9m) benefited from the looting. The bank's previous CFO, Philip Truter, who was responsible for enabling the manipulation of the banking system, also benefited, but nowhere near his peers;

According to the report, Mukhodobwane and Truter have confessed to their complicity in the crime. Ramavhunga, Madzonga and Matodzi have denied any wrongdoing; and

KPMG partner Sipho Malaba - who was the engagement partner for VBS and the person who ultimately signed off the false 2017 year-end audit that was subsequently withdrawn by the bank's curator - benefited to the tune of R34m.

Motau concludes: "The investigation has revealed a wide range of criminality in the conduct of the affairs of VBS. That is also in regard to Vele. Indeed, it emerges very clearly that VBS and Vele have been operated as a single criminal enterprise, with Matodzi firmly at the helm."

On that basis, Motau recommends that the Prudential Authority takes "immediate steps" to pursue criminal charges.