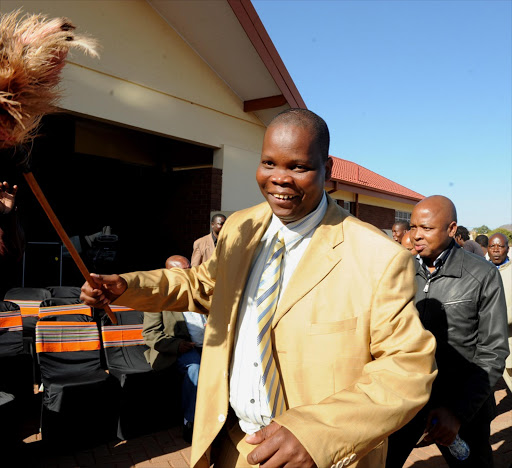 Until recently‚ the only thing that would have probably kept VhaVenda King Toni Mphephu Ramabulana awake at night was the looming Supreme Court of Appeal challenge for his crown but now VBS seems to have added to his woes.

A detailed and damning report compiled by Advocate Terry Motau‚ released on Wednesday‚ alleged that Mphephu Ramabulana was a beneficiary in the failure of VBS Mutual Bank.

The king’s spokesperson‚ Mathivha Makonde‚ said the report would have to be studied first before any comment was forthcoming.

It is in this report that Mphephu Ramabulana’s name was listed among 53 people who allegedly “gratuitously” benefited from R1.8bn from the bank.

The 148-page report titled “The great bank heist” has a black cover page with a graphic of what looks like a heavy vault door left partly open.

A 1977 story of how thieves dug their way into a bank vault in Krugersdorp‚ retrieved their loot and never got arrested is shared by Motau in the report. He said‚ however‚ his report into the “sorry affairs” at the bank‚ originally known as the Venda Building Society‚ “will reveal that the perpetrators of the heist at VBS made away with almost R2bn. And they certainly did not put in anything like the hard work and effort of Mister Nightingale and his team”.

The word fraud appears 58 times in the report which Motau said “revealed a wide range of criminality in the conduct of the affairs of VBS”. The Sunday Times reported a few months ago that Mphephu Ramabulana had accused senior executives at VBS of leaving him with a R240‚000 monthly bill after they allegedly used his name to secure money from the bank‚ which went towards a shopping spree for luxury items‚ including a Bell helicopter.

It was revealed at the time that the VBS chairman‚ Tshifhiwa Matodzi‚ and Vele Investments chief executive Robert Madzonga were accused of having hoodwinked the king into believing that a R7.8m Dainfern house‚ a Range Rover‚ a BMW 7 Series and two Mercedes Benz Vianos were gifts.

Another story later said Mphephu Ramabulana was to receive a herd of cattle from the directors of VBS as a token of apology for the “embarrassment caused to him”.

Madzonga was quoted as saying at the time that‚ “Vele Investments wishes to formally apologise to the king and his royal family and the entire VhaVenda nation for what they are going through as a result of the negative publicity”.

Before then‚ Mphephu Ramabulana had only been making headlines in an ongoing legal battle with his niece Masindi Mphephu over the Venda kingdom’s crown.

Masindi is the daughter of his half-brother‚ Tshimangadzo Dimbanyika Mphephu‚ who died in a car accident in 1997 and was subsequently succeeded by Mphephu Ramabulana as the leader of the Venda kingdom.

The 26-year-old Masindi in September 2016 managed‚ through the courts‚ to stop a planned coronation a day before then president Jacob Zuma was to award her uncle a recognition certificate as king of the VhaVenda.

The matter is now with the Supreme Court of Appeal. Masindi has already indicated that she would stop her challenge at the Constitutional Court.

The report stated that Mphephu Ramabulana and his legal advisor‚ Paul Makhavhu‚ “received vast sums of money for lending the support and influence of the royal family to VBS and Vele”. Makhavhu is cited as describing those payments as “shameful”.

The report further said Makhavhu has testified that "the people in the royal family are clueless as far as business is concerned". He was explaining how Mphephu Ramabulana got his company Dyambeu a stake in VBS‚ bought for it by two companies.

"We didn’t have a single cent as the royal family. Not a single cent‚” Makhavhu is quoted as saying in the report.

The king’s spokesperson‚ Mathivha Makonde‚ could not confirm whether Mphephu Ramabulana ever received any cattle from anyone apologising in regard to the VBS saga‚ as previously reported. “I was not there at the time. I am not sure what happened then‚” he said.

Makonde would also not comment on the report implicating the king in the VBS scandal. “The standard procedure is that the report should be seen by those it implicates and we’re yet to receive it. When we do get it‚ we will study the report and only thereafter we will be able to comment‚” he said.