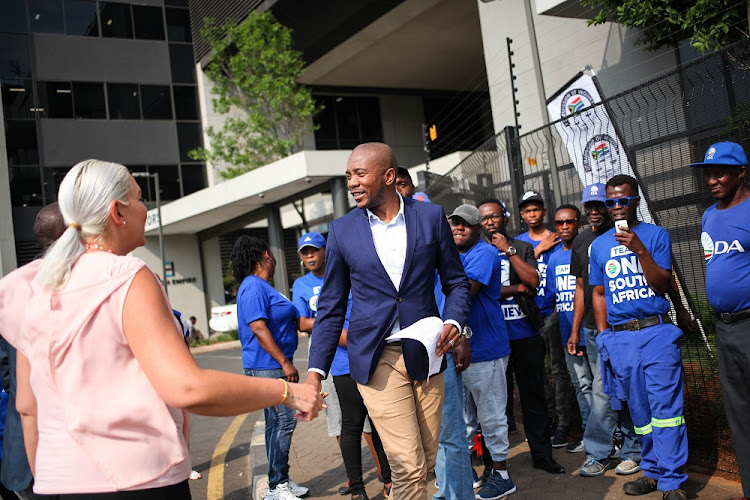 Leader of the Democratic Alliance, Mmusi Maimane greets party supporters outside the Hill on Empire building in Parktown, Johannesburg, on 27 September 27 2018 where the Zondo Commission of Inquiry into State Capture is sitting.
Image: Alaister Russell/The Sunday Times

President Cyril Ramaphosa should “ come clean and account” by testifying at the Zondo Commission of Inquiry into state capture as he was part of government dealing with state-owned enterprises.

Democratic Alliance leader Mmusi Maimane reiterated the party’s call for Ramaphosa to take the stand at the commission currently sitting in Parktown, Johannesburg.

Speaking outside the venue, Maimane said:  “It ought to be accountable. Magashule, Ramaphosa and the whole leadership that sat and tried to convince the banks not to shut down the accounts of the Guptas. When  Ramaphosa was the chair of the inter-ministerial committee on state-owned enterprise, he would have known the boards [of the companies]. He would have exercised the ANC deployment committee. Now to suddenly wash themselves clean as if this was Jacob Zuma and the ANC has nothing to do with it, is misleading the people of South Africa…If we want to eradicate state capture, let’s deal with the ANC. Let them come here [and give evidence]. If we need to appear ourselves, I will come and give evidence”.

Maimane accused the ANC of being at the heart of state capture and making the act its own policy.

“When you read ANC documents they were intent to capture the state. State capture is an act of corruption. You take the resources of the people of the country to the benefit of a few individuals who politically connected at the expense of the people of this country. Our call here today is that the ANC must come and appear [before the commission].

“We wrote legally to the ANC and certainly to the commission itself and said we demand that the ANC must come and appear before the commission. If we are going to ensure that state capture never happens again, then we must ensure that the ANC is held to account in this regard. It is not ironic to note the fact that no one has been arrested because it is a factional battle within the ANC. We refuse to say the resources of South Africa must be captured by a faction of the ANC,” he said.

Ramaphosa recently told Parliament that it would be his “greatest pleasure” to testify before the commission of inquiry into state capture.

Rajesh Gupta insists he never had ‘any discussion’ with Mcebisi Jonas

“I did not introduce myself to anybody‚ nor did I participate in that meeting. I did not have any discussion with Mr Jonas at all‚” he states in an ...
News
3 years ago

Ramaphosa made the undertaking while responding to oral questions in the National Council of Provinces (NCOP).

Officials from the country’s four commercial banks have testified on how senior  ANC officials invited them to Luthuli House to discuss  the closure of the Gupta bank accounts.

Among the people who attended the meeting was then ANC secretary general Gwede Mantashe, Enoch Godongwana and Jessie Duarte. There were also another meeting led by former mineral resources minister Mosebenzi Zwane in which bank official were pressured to retract their decisions to close the Gupta accounts.

“This treaty has to be ratified by Parliament before it can take full effect. Yesterday the DA wrote to the speaker calling for an urgent sitting of Parliament so that we can have this treaty ratified. The Guptas have nowhere left to run or hide.”

DA leader Mmusi Maimane, along with other members of the DA and a small group of their supporters, picketed outside the state capture inquiry in Parktown, Johannesburg, on September 27 2018. The DA is demanding that the entire ANC stand before the Zondo commission of inquiry, saying that they are all involved.

Ajay Gupta has dismissed as “fiction” ex ANC MP Vytjie Mentor’s evidence that he offered her a ministerial position and lists several reasons why she ...
News
3 years ago

Under fire ANC secretary-general Ace Magashule says he wants to testify before the Zondo Commission of Inquiry into state capture.
News
3 years ago

Lynne Brown’s application to cross-examine  a witness at the Zondo Commission of Inquiry has been dismissed.
News
3 years ago

State Capture is meant to benefit a few elite

The state capture phenomenon manifests itself in different countries and has devastating impact on affected countries.
News
3 years ago

STATE CAPTURE INQUIRY: Lynne Brown not denying relationship with the Guptas, but says doesn't work for them

Former public enterprise minister Lynne Brown conceded that she had a relationship with the infamous Gupta family.
News
3 years ago
Next Article