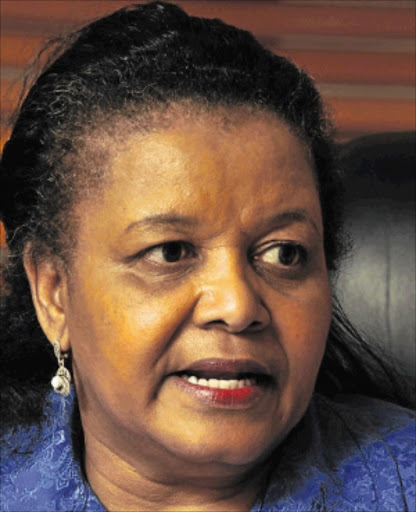 The family of the late environmental affairs minister Edna Molewa said that she had left an indelible mark in the lives of the millions of people.

“Molewa took what she had been given in life and multiplied it‚ over and over again. Not once did she bury her talent in the ground and hope for salvation‚” her family said on Sunday.

Molewa died on Saturday from complications associated with Legionnaires’ disease. The Sunday Times reported that she became ill during a trip to Beijing‚ China‚ and was hospitalised on September 8. She did not respond to antibiotics and doctors decided to medically induce a coma.

“It is particularly difficult to come to terms with her passing‚ given that she was cut down in the prime of her life when she still had so much to offer to her family‚ her friends‚ her colleagues‚ her church‚ and to her community‚” Molewa’s brother Fana Mmethi said in a statement.“We are comforted in the knowledge that we are not alone in this‚ our darkest hour.”

Molewa joined the ANC in her youth and dedicated her life to uplifting South Africa.

“We as the family recall that from her earliest years she was somebody who stood firmly for justice‚ not content to remain a bystander to history‚ but taking up the cudgels on behalf of the poor‚ the oppressed and the marginalised‚” Mmethi said.

Mmethi said: “It is a source of enduring pride for us as the family that our sister‚ who rose from such humble beginnings‚ became first a member of parliament‚ then a provincial MEC‚ to a premier‚ to a minister. Such was the faith vested in her by our country’s leadership that she was called upon to serve as an acting president on numerous occasions. She was held in extremely high regard by international leaders especially in the environmental fraternity.”

He said Molewa’s “unwavering‚ deep and abiding faith” was one of her great qualities.

“It is a faith that sustained her throughout her life‚ and it is that faith from which we draw sustenance as we mourn her‚ but also commemorate an extraordinary life lived in the footsteps of Christ‚ and in service to her fellow man.”

Tributes have been pouring in for environmental affairs minister Edna Molewa who died at the age of 61 on Saturday.
News
3 years ago
Next Article