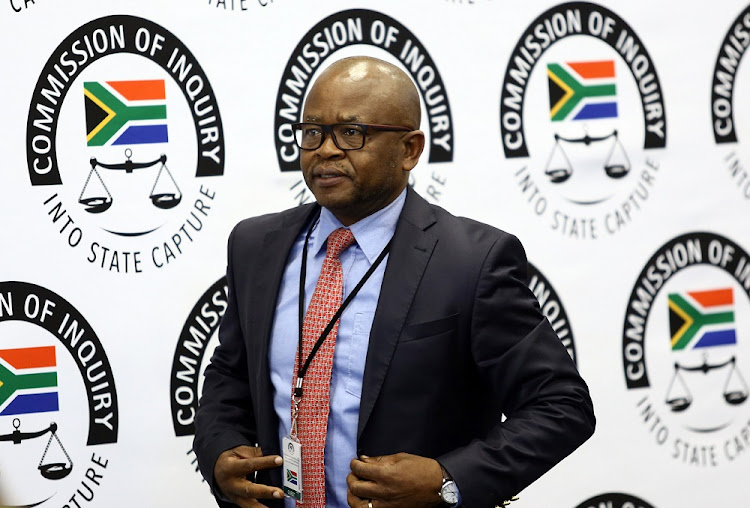 Former CEO of GCIS, Themba Maseko during the second day of his testimony at the state capture commission on inquiry in Parktown, Johannesubrg, on Thursday, August 30 2018.
Image: Masi Losi

Ajay Gupta told former government communications head Themba Maseko that Jacob Zuma would “sort out” any minister who refused to hand over their advertising budget to him.

Ajay also boasted that Zuma‚ who was president at the time‚ had dinner with his family on a weekly basis and claimed ministers were “summoned” by the president or to their Saxonwold home when they were “not cooperating".

“He said listen‚ this is how things are going to work … you must go to all the departments‚ talk to ministers‚ tell them to transfer all the budgets into … the GCIS [Government Communication and Information System] account.

“He said your only job is to ensure that the money comes to me and The New Age newspaper‚” Maseko said‚ adding that Ajay Gupta’s “aggressive” demeanor left him with the impression that he was issuing an “instruction” to him.

Maseko is giving evidence at the Zondo commission of inquiry into state capture about how Zuma urged him to “help” the Guptas and how subsequent to this Ajay Gupta instructed him to meet with government departments and force them to channel R600-million in government advertising spend to the family’s media interests.

Not even the National Treasury would have been able to do what Ajay Gupta had instructed him to do‚ Maseko said.

“He said that if I have other problems‚ or difficulties with any of the ministers refusing to transfer their money to me‚ I must come back to him and he will call the ministers to order and he will make sure that they deliver.

Maseko had earlier testified that‚ shortly before he met with Ajay Gupta at Saxonwold in Johannesburg in 2010‚ Zuma had called him.

During that 90-second conversation‚ Maseko said‚ Zuma did not specify how exactly he wanted him to help the Guptas. But the call left Maseko with the impression that Ajay Gupta had asked Zuma to contact him as part of an attempt “to demonstrate his power and influence”.

Despite that meeting not ending well‚ according to Maseko‚ Ajay Gupta persisted in demanding that the GCIS channel money to The New Age newspaper.

Maseko testified that Ajay was enraged when he did not agree to a subsequent meeting – which was requested by Rajesh “Tony” Gupta. According to Maseko‚ Ajay later called him and told him that he was being “uncooperative” and that he would report this lack of cooperation to his “superiors”.

Because of Zuma’s previous call‚ Maseko said‚ he believed these superiors included the then-president. He said he received multiple calls from government communications heads‚ complaining that Rajesh Gupta had been calling them and demanding that they place advertising in The New Age.

“Tony Gupta was making calls demanding that they place advertising in The New Age newspaper… He said he talked to me‚” Maseko said.

Months later‚ Maseko was fired by Zuma. Zuma asked Minister in the Presidency Collins Chabane to announce this removal at a Cabinet meeting‚ where Chabane revealed that Mzwanele Manyi had replaced him as head of GCIS.

Maseko said he was moved to the Department of Public Service and Administration as a director-general.

Inquiry legal counsel Vincent Maleka said the State Capture Commission would lead evidence about how much of government’s advertising budgets was allocated to Gupta media houses.

Former government spokesman and GCIS CEO Themba Maseko, who told the state capture inquiry about how then-president Jacob Zuma removed him from his post after he refused to spend R600m of the GCIS’s budget on the Guptas’ media outlets The New Age newspaper and ANN7, said he believes that there is a basis for potential criminal prosecution of Ajay Gupta and Jacob Zuma.