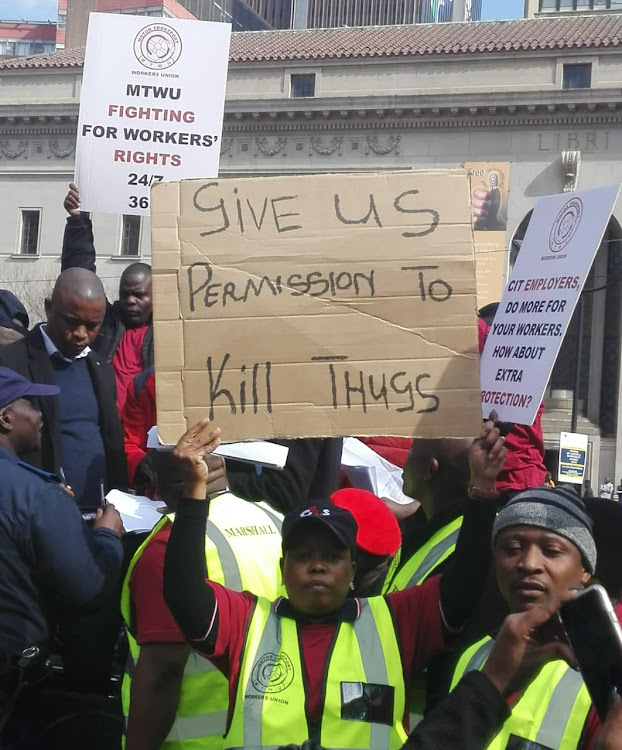 Thousands of cash-in-transit guards have demanded a "licence to kill" robbers during heist attacks to protect themselves.

This comes after a spate of cash-in-transit robberies that have left many guards injured and others killed.

More than 150 cash heists have been recorded since January, according to the South African Banking Risk Information Centre (Sabric).

Yesterday, Motor Transport Workers Union (MTWU) security officers in the cash-in-transit industry, SBV, G4S and Fidelity marched to hand over a memorandum of demands to Gauteng MEC for community safety in Johannesburg.

The workers asked the government to allow them to shoot to kill during attacks.

A guard at SBV, Phinda Ngobeni, told Sowetan yesterday the government "must allow us to shoot criminals dead so they can refrain from attacking us". Ngobeni said the money they transported was insured; their lives were not and could not be replaced.

"I leave home every day not knowing if I will return safe to my family. Every morning I say goodbye it might in fact be my last," he said.

David Mofokeng of G4S said salaries needed to be reviewed from R11000 to R20000 a month because they worked the most dangerous job.

Khumo Buwa, a cash processor at SBV, said: ". my brothers face difficulties doing their work because of criminals who kill them.

"We feel enough is enough; we cannot keep working if we are not taken seriously."

MTWU spokesman Frank Nxumalo said the union had given the MEC 14 days to respond to their key demands.

"Members of the public have also been caught in the crossfire and the department must tighten the security of the officers and the public around cash-in-transit vehicles.

"[We] appeal to the government to give proper counselling to our members after attacks. They are also human beings with families ."

Since the beginning of 2018, South Africa has seen a high number of cash-in-transit heists. Exactly how do these brazen gangs operate and manage to pull off a heist?