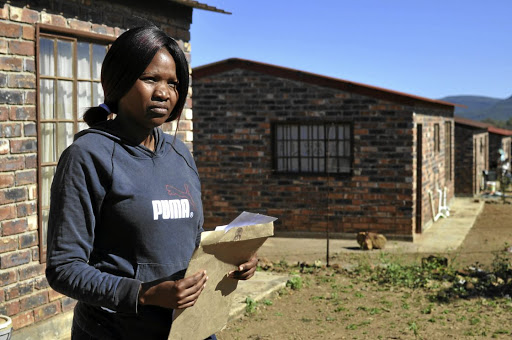 Tsholofelo Molefe of Groot Marico next to her RDP house that she has been denied access to.
Image: Tiro Ramatlhatse

A North West station commander is fighting for an RDP house with a woman who has claimed its ownership.

Groot Marico police station commander Margaret Mokgwatlhe is refusing to let go of the house that belonged to her deceased boyfriend to indigent Tsholofelo Molefe on the basis that her boyfriend had renovated the property.

Mokgwatlhe has admitted that the house belonged to Molefe, but said Molefe would have to settle for another RDP house as her late boyfriend had invested money on it.

"My boyfriend tiled the floor and put up ceiling, he even planted some flowers in that RDP house, so I just can't let it go," Mokgwatlhe said.

Mokgwatlhe said it was not her late boyfriend's fault that the house had been wrongly allocated to him, blaming the municipality for the error.

She said she did not have a beef with Molefe but believed Molefe had been influenced by her boyfriend - a police officer who is her subordinate.

She claimed that Molefe's boyfriend wanted favours from her after he was involved in a police vehicle matter he was not authorised to use.

Two councillors from the Walter Sisulu municipality are being tried for allegedly selling an RDP house to a member of the public for just over ...
News
3 years ago

"He wants me to sweep the case under the carpet and I can't do that. He's now using his girlfriend to get to me."

Molefe is adamant the house is hers as it was allocated to her. She said she could not occupy another person's house as that would not give her a guarantee that it won't be claimed back by the rightful owners or their relatives.

Molefe works at a funeral parlour where she earns R1200 a month, and takes care of her 13-year-old child and two of her late sister's children.

Mokgwatlhe confirmed she did not often live at the house.

"I have a big house in Welvedaght, but my late boyfriend really worked on that RDP house," she said.

MEC for local government and human settlements Fenny Gaolaolwe promised to attend to the matter tomorrow.

"I cannot believe the station commander is claiming the house belonging to the poor young woman. I am going to fix this matter on Tuesday."