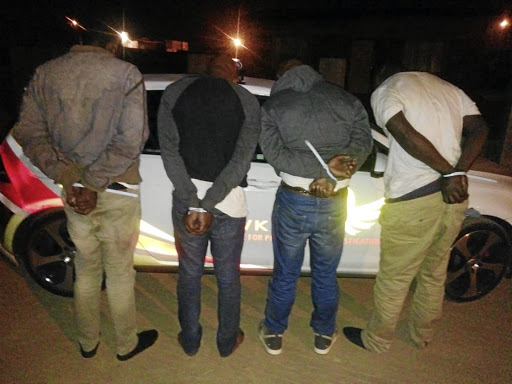 Four of the seven robbery suspects are arrested after a cash-in-transit heist on a rural road in Polokwane, Limpopo, on Monday.
Image: ANTONIO MUCHAVE

Screaming children in the middle of the night alerted neighbours to the Hawks' arrest of a mother and her co-accused in connection with a cash-in-transit heist.

The arrest of the 32-year-old mother of two and six men yesterday came after a cash-in-transit heist along the Matlala Road outside Polokwane in Limpopo on Monday.

The group was arrested at a house in Extension 73 near Madiba Park in Seshego.

A neighbour, who asked not to be named for fear of victimisations said she was woken up at 2am by the screams of the children of the arrested woman.

"When I peeped through the window I saw lots of police cars and officers in bullet-proof vests jumping the wall as they surrounded the entire house. I heard a loud bang against the door as police gained entry into the house," she said.

The neighbour said the children, a girl aged six and boy aged two, had witnessed their mother being handcuffed.

"The mother was found with another man in the house who was also arrested," she said.

She said the woman only lived with her two children in the house.

The Hawks have arrested seven suspects in connection with a cash heist that took place in Limpopo on Monday morning.
News
4 years ago

Maluleke said both cars, a white Ford Kuga and a Toyota bakkie, were riddled with bullet holes. He said investigations were continuing. Five other men were arrested in Groblersdal on Monday and yesterday morning.

Another neighbour described the woman as someone who enjoyed throwing lavish parties at her house and attracted visitors "who would arrive in luxury cars".

"We would see big expensive cars parked outside her house and friends braaing meat and drinking. It was always a surprise to us how she could afford such a lavish lifestyle when she is unemployed," the second neighbour said.

She said her neighbour had not worked anywhere since she arrived in the area nearly a decade ago.

The woman had inherited her mother's RDP house that she demolished and built a five-roomed house with a double garage within a week in 2013, the resident said.

The woman's house stands out in a township clustered with RDP houses.

During the robbery on Monday, security guards were held at gunpoint and explosives were used to blast open the safe. Two officers were injured and taken to hospital.

Maluleke said all seven suspects would appear in the Polokwane Magistrate's Court today.

They have been charged with robbery, attempted murder, illegal possession of live ammunition and explosives, and possession of stolen vehicles.

Have you ever wondered how much money is recovered in botched cash-in-transit heists or when suspects in these heists are arrested?
News
4 years ago
Next Article