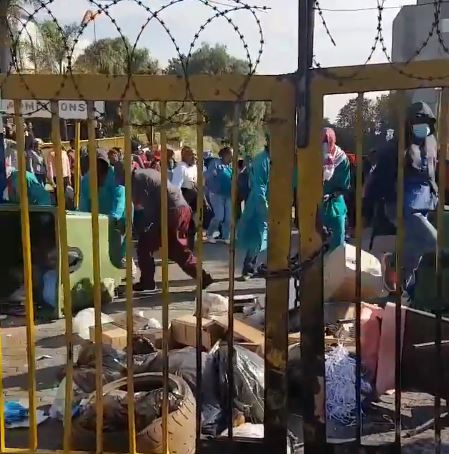 Patients arriving at Charlotte Maxeke Hospital are not allowed in.
Image: Screengrab

A protest erupted at the Charlotte Maxeke Academic Hospital in Johannesburg on Thursday.

A hospital staffer told the publication that rubbish had been strewn across the corridors of the hospital.

Another source‚ who asked not to be named‚ said: “We presume it is related to performance evaluations which [used to] lead to the awarding of bonuses. But now‚ there is no money for bonuses.”

Some staff members are reportedly holed up in the wards and in the basement of the hospital.

"There is no harm to the patients inside‚" the source said‚ adding that they had medics who were attending to them.

Patients arriving at the facility are‚ however‚ not being allowed to enter the hospital.

The gates to the facility were locked as protesters scattered debris and small fires were started near the entrance.

Department of health spokesman Lesemang Matuka referred all questions to the facility's CEO‚ Gladys Bogoshi. She was‚ however‚ said to be in an emergency meeting with the police on how to best handle the situation.

In April‚ medical waste and rubbish were also scattered all over the hospital’s floors by workers‚ including nurses and support staff such as cleaners and porters. At the time‚ their union told the publication they were dissatisfied with the hospital’s non-payment of performance bonuses.

“Their grievance is the non-payment of their performance bonuses‚ which affects all Gauteng health departments‚ not just Charlotte Maxeke. They have not been paid these bonuses for the last two financial years‚” Mvumvu was quoted as saying. The provincial health department had been approached to resolve the matter‚ according to the broadcast.