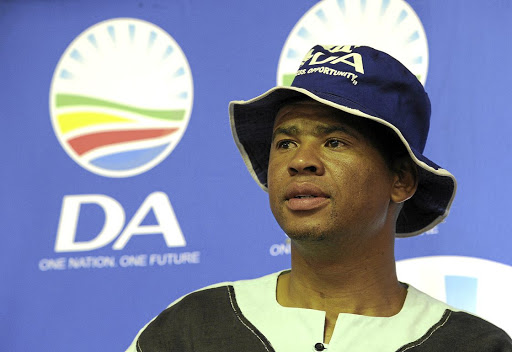 The DA's Loyiso Nkohla has warned Mmusi Maimane of an ouster after the 2019 general election./ Nasief Manie /Gallo Images

Poo flinger Loyiso Nkohla has raised a stink in the war between the DA and Cape Town mayor Patricia de Lille.

Nkhohla, in a letter sent to DA leader Mmusi Maimane, raised allegations of assassination plots, illegal surveillance and back-stabbing as a sideshow to the meltdown between De Lille and the party

His letter, which has been circulating on social media, was written shortly after the Western Cape High Court in Cape Town restored De Lille's mayoral chain by granting her application for an urgent interdict stopping the DA rescinding her party membership.

Nkohla confirmed yesterday that he had authored the letter and sent it to Maimane.

The former Ses' Khona leader's appointment as a council community liaison officer was questioned last year in a report by a DA committee. It noted that Nkohla "enjoys special status in the city" and abused a council vehicle.

Why Nosimo Balindlela ditched the DA

"In case you were not watching TV today, the Western Cape High Court has suspended your unconditional cessation of membership of PDL [Patricia de Lille]," the letter said.

"I am told that right now your lawyers are reporting to your white masters who are so angry, and they are discussing an appeal and to [bring] forward another vote of no confidence in PDL."

Nkohla told Maimane there were plans to have him assassinated.

". you are [the] only known enemy to me . I am aware Mmusi, as your DA people have been following me every day. They even [stole] my carpet with an aim of bugging it to listen [to] every conversation I have at my place."

In the letter, Nkohla warned Maimane the DA would get rid of him after the general elections next year.

"Mmusi, we have warned you but you decided to undermine us and listen to white views because they make sense to you," the letter said.

"You are next . after 2019 general elections. Whites in the DA have decided to claim their party back from the hands of black leaders because it was Helen [Zille's] project, they don't believe in that. They have started by having Natasha [Mazzone] as an imposed deputy chairperson of the [federal executive] and spokesperson."

Maimane's spokeswoman, Portia Adams, said: "I'm sorry but I'm not going to dignify this with a response."