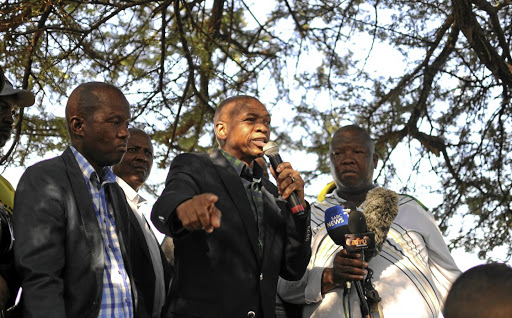 North West premier and ANC chairman Supra Mahumapelo addressing the media and his supporters after changing his mind about resigning.
Image: Tiro Ramatlhatse

The pro-Supra Mahumapelo faction within the provincial ANC leadership in the North West has removed MPLs seen as his detractors from the provincial legislature.

In a copy of the Provincial Gazette‚ which is currently doing the rounds on social media‚ eight MPLs who are seen to be anti-Mahumapelo have been removed from the list of the party's provincial legislators.

The names of those facing the chop include chief whip Raymond Elisha‚ who insiders said had spoken in favour of the removal of Mahumapelo during President Cyril Ramaphosa’s visit to the province last month.

Supra Mahumapelo decided to withdraw his resignation after he realised that his chosen successor would not succeed him.
News
3 years ago

Others facing the axe are former education MECs‚ Wendy Matsemela‚ Saliva Molapisi‚ Mahlakeng Mahlakeng and Motlalepule Rosho. The latest development is seen as a move to insulate Mahumapelo should a motion of no confidence in him be debated and voted on by the legislature.

The acting provincial secretary of the ANC in the North West‚ Suzan Dantjie‚ who is also the speaker of the legislature‚ could not be reached for comment by the time of writing.

But co-operative governance and traditional affairs deputy minister Obed Bapela‚ who is the ANC national executive committee deployee to the province‚ has confirmed the amended province to province list.

“That’s the decision of the PEC (provincial executive committee)‚ they took that decision. I am aware of it. Remember PECs have the powers to allocated to them to amend (lists)‚” said Bapela.

He said that according to ANC rules‚ the national leadership only gets involved in the selection of a premier.

“You can’t impose much on them but they would write to the [secretary-general’s office] to say ‘we have taken the following decision‚ be aware’‚” said Bapela.

He said informing the party’s secretary-general was only a courtesy.

“I don’t remember seeing names [of those to be removed] but they did say they will be amending the composition of the legislature‚” he said.

Supra Mahumapelo is convinced there was foul play and that money was exchanged to fuel the protests.
News
3 years ago

'ANC owes me nothing, I will not ask for redeployment' - Supra Mahumapelo after resignation

Supra Mahumapelo will not be seeking redeployment following his resignation as the North West premier.
News
3 years ago
Next Article