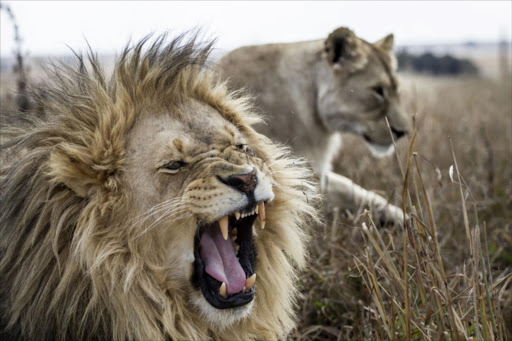 Lion and his partner in an enclosure at the Weltevrede Lion Farm in Heilbron.
Image: Gallo Images

Captive lions like Shamba have lost their fear of people‚ making them dangerous to interact with.

This is the view of the Endangered Wildlife Trust senior wildlife trade officer Dr Kelly Marnewick following the mauling of a man by a 10-year-old lion he had hand-raised from birth in Thabazimbi on Saturday.

Michael Hodge owns a predator park in Thabazimbi and usually took visitors daily to a lion enclosure where tourists could view Shamba the lion close-up. In its promotion on its website‚ the Marakele Animal Sanctuary also promises that for R70 an adult and R30 a child‚ visitors can visit the camp in the camp’s “lion mobile” car‚ where Shamba will “jump up and look you in the eyes‚ he also sits on top of the truck whilst we take the drive through the camp”.

Following the attack‚ the Hodge family announced Shamba was killed on Saturday while Hodge was being extricated from the lion.

Marnewick said there was no conservation benefit in keeping captive lions.

The owner of the Marakele Animal Sanctuary‚ who was attacked by his lion Shamba in Thabazimbi on Saturday‚ is recovering in hospital‚ his family said.
News
4 years ago

“Captive lions lose the fear of people. That is why you see these kinds of incidents‚” Marnewick said.

She said that these incidents were not uncommon and mentioned another incident which happened north of Gauteng in February where a 22-year-old woman was killed by a lion at a private game reserve.

Marnewick said she would not advise people to visit such places because of safety concerns as well as concerns around the welfare of the animals‚ links to captive lion shooting and bone trade as well as potential negative impacts on wild lion populations. Lions should be enjoyed where they belong‚ in the wild.

“Wild lions are usually scared of people. In this incident‚ it appears that the lion was fed from the truck daily and thus likely associated the truck and people with feeding.”

Marnewick said the EWT had been calling for more effective regulation of these enterprises.

A six-month-old baby boy was mauled and killed by a dog at home in Johannesburg.
News
4 years ago

In a statement released in March‚ the EWT said it had been calling for radical change in the captive African lion industry in South Africa since before 2009.

“These facilities need to be closed down to protect the staff and visitors who are frequently injured - and even killed - through interactions with lions that have lost their fear of humans.”

The National Council of SPCAs also condemned the unnecessary destruction of Shamba. It said the NSPCA was also opposed to captive wild animals and upheld the notion that wild animals belonged in the wild.

“This incident highlights the very reason why wild animals should not be kept in captivity and further indicates that the public should stop supporting facilities that keep wild animals in captivity‚” said Martie Rossouw‚ manager of the NSPCA Wildlife Protection Unit.