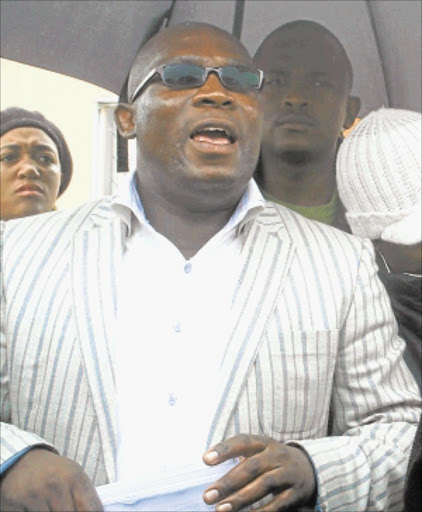 Western Cape Human Settlements MEC Bonginkosi Madikizela claimed on Wednesday that the ANC played a role in the unrest that rocked Zwelihle in Hermanus.

More than 70 people have been arrested in the town after an apparent land grab that was thwarted on Friday. Protesters later explained that the municipality had failed to provide proper homes‚ especially for backyard residents‚ and that their pleas were being ignored.

When frustrations boiled over protesters clashed with police‚ municipal property was damaged and foreign-owned businesses were looted. Madikizela told aggrieved residents on Tuesday that government would intervene to help them.

Madikizela (DA) said on Wednesday that he would submit a motion to the Western Cape Provincial Parliament to refer an ANC MPP to the Ethics Committee for allegedly inciting violence in Hermanus.

“We have obtained photographic evidence clearly showing [this] ANC MPP in a text conversation (with another ANC official) that proves the ANC is the 'third force' behind the unrest in Zwelihle‚ Hermanus‚" he claimed.

“The evidence clearly shows that the land grabs and subsequent unrest in the area is part of the ANC’s political agenda to instigate violence and urge residents to illegally occupy land‚" he added.

Meanwhile‚ Madikizela’s assurances to hundreds of residents gathered on a sports field on Tuesday that the housing situation would be resolved in the town did not convince everyone.

Primrose Mqhu said‚ “I have little faith that we are going to get the houses that were promised. You need to understand that people are upset. This level of protesting never happens here but I think people have reached their limit. They are upset‚” she said.

The 47-year-old lives as a backyard dweller with her son and his three children. “The anger started when the wrong house was given to the wrong owner. The MEC was here before and nothing changed after he left. What makes this time different?” she asked.

Theron Mqhu said the cries of backyard dwellers needed to be taken seriously before the protests will stop. “There are always a lot of excuses as to why we can’t get houses or why there isn’t land. If you don’t listen to backyarders something like this will happen. Backyarders have always been overlooked. This time we decided enough is enough.”

Sibongile Magqirha has been a backyard dweller and has been on a waiting list for an RDP house for years. “After the MEC’s speech‚ I don’t think things will really change for us.”

A municipal building‚ a library and a police station were torched in Zwelihle. Foreign-owned shops were looted and many foreigners had to flee during the unrest. Roads were strewn with rubble and stones and some people were prevented from leaving the township to go to work.

The ANC has been approached for a response; the publication will update this article to reflect it when it arrives.

"Anarchy must not be allowed to flourish‚" ANC stalwart and current mineral resources minister Gwede Mantashe said on Tuesday‚ as he condemned ...
News
4 years ago

EFF in Gauteng says illegal land occupation in the province can be addressed moving quickly to expropriate land without compensation.
News
4 years ago

The community of Lombardy West in is up in arms after finding themselves in a land invasion.
News
4 years ago

“We are saying enough is enough. There is open land to build affordable houses for us.”
News
4 years ago
Next Article