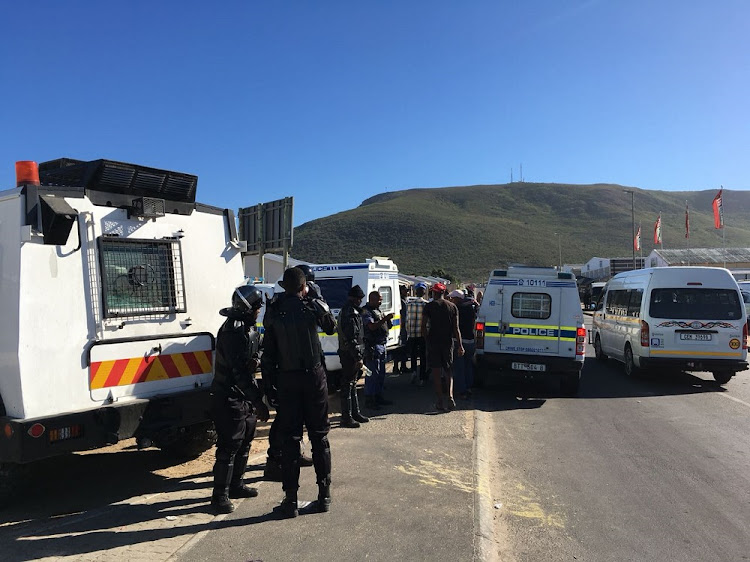 “We are saying enough is enough. There is open land to build affordable houses for us.”

Community leader and protest organiser Masibulele Jimlongo pulled no punches when he explained why some residents are fed up waiting for affordable housing in Hermanus.

Smashed rocks littered roads‚ broken grass crunched underfoot and the sooty remains of the trashed Zwelihe public library and other buildings bore testimony on Tuesday to violent conflict over land and housing in the coastal town. The town remained volatile on Tuesday as a heavily armed contingent of police patrolled the streets.

#Hermanus protests over the past few days has left the Zwelihe public library completely destroyed. Take a walk through🎥 @TimesLIVE pic.twitter.com/5mXr7D3wE9

Protesters damaged buildings on Monday - including setting fire to part of the satellite police station in Zwelihle‚ the library‚ municipal buildings‚ a car and a recycling plant - as running battles between police and protesters escalated.

Mineral Resources minister Gwede Mantashe‚ speaking at a Land Reform Dialogue in Johannesburg on Tuesday‚ described what happened in the town as “anarchy” that must not be allowed to flourish.

Anarchy must not be allowed to flourish. It must be dealt with & we must allow law enforcement agencies to do their work #LandReformDialogue

The spark that unleashed chaos in the town‚ famous as a whale-watching tourist destination‚ was ignited on March 23 when scores of people marked out plots in a mass land grab that was quickly thwarted by police and Red Ant security personnel. Running battles ensued with rocks raining down on police‚ rubber bullets fired in return and a looting spree targeting foreign-owned shops.

Jimlongo said on Tuesday that residents of the local township‚ Zwelihe‚ had been waiting for proper housing since 1991. “Some of us are third-generation backyard dwellers. The RDP houses that were allocated to us have been sold to family and friends of people working in the municipality.

“We have raised this matter with the municipality and the MEC of Human Settlements but they never got back to us. There were houses allocated to us at Mount Pleasant but we never got them.”

He said the community had decided that enough was enough. While acknowledging that foreign-owned businesses had been targeted by looters‚ he blamed break-away groups of protestors whose actions were not sanctioned.

Some foreign shop owners who escaped the looting have loaded up their stock and left the area. Somali store owners who rented a building from Nozibele Matwede had their store looted on Sunday evening. The next day the shop owners arrived and‚ under police guard‚ removed their stock. “They left. I haven’t heard from them ever since‚” said Matwede.

Business owners have complained bitterly about staff being intimidated and not being allowed to travel to work. Some residents of Zwelihle fled their homes and took shelter elsewhere.

The Hermanus Times reported that about 680 people were housed at Sandbaai Hall on Monday night and approximately 260 more at Shofar ministries. Many of them were children.

Residents of Zwelihle in Hermanus demand that their call for land and housing be heeded, otherwise they will cause havoc. The residents took to the streets on Monday March 26 2018, in a protest th...