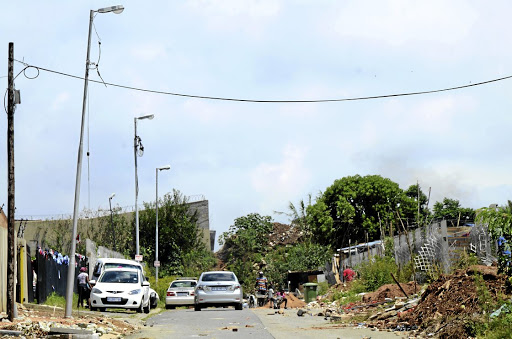 Some residents of Lombardy West in northern Johannesburg have been without electricity for weeks after shacks mushroomed in their area. /Mduduzi Ndzingi

The community of Lombardy West in northern Johannesburg is up in arms after finding themselves in a land invasion which is affecting their electricity supply.

The area has been without electricity for the past month after land grabs started in December, when 10 shacks were erected in the area.

The settlement then exploded with close to 90 informal structures built close to each other and overflowing on one of the main roads in the area.

It is an unusual situation where the shacks have electricity while the formal houses remained in the dark.

Malema will not appear in Court to face charges over calls he had made for his supporters to invade unoccupied land.
News
4 years ago

"There was a section where about 20 shacks were erected about 10 years ago. We found those structures here but since December more people have been invading and squatting in this area," she said.

The land grabs have led to the community of Lombardy West bearing the brunt of high electricity bills while they did not benefit from the service.

"We haven't had electricity for a month. We complained to the councilor and the city, but nobody is willing resolve the matter," Shibambo said.

According to another resident, Evodia Tshikhathi, cable thefthas been the main problem arising from the invasion.

"Unlike other places that have experienced land invasions, our problem is unique because these people are stealing our electricity. They have connected cables from our side to their side," she said.

Land expropriation is not a “smash and grab”: Ramaphosa

Ramaphosa has called on the police to clamp down illegal land occupations currently unfolding in Gauteng.
News
4 years ago

She said in one instance power utility City Power reconnected their supply after they complained, but less than two hours later the shack dwellers reconnected their cables, leaving them without power. Shacks built on the invaded land were evolving. The squatters were doing away with metal sheets and now building permanent structures.

Clement Mjondwana, one of the squatters, said he was offered a stand in December.

He said they could not live without electricity and opted to connect illegally.

"What are we supposed to do? The government said it would build houses for us, it promised to give us electricity and water but it hasn't. The only thing we can do is take it," Mjondwana said.

The city did not respond to questions sent to them on Wednesday.