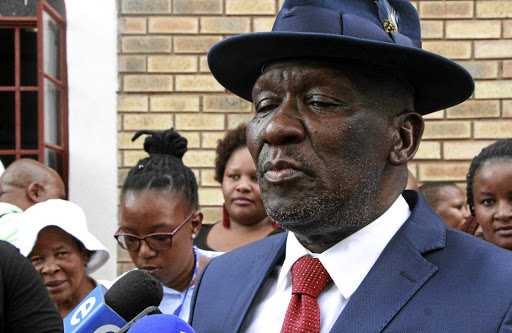 Effective crime intelligence services may have prevented the Engcobo police station attack where five police officers were killed on duty.

This is the view of newly appointed Police Minister Bheki Cele who has listed fixing crime intelligence as one of his immediate top priorities.

Cele told Sowetan yesterday that the police's crime intelligence service has been embroiled in controversy in the past six years and had not focused on its core function.

The division has seen its controversial former head Lieutenant-General Richard Mdluli enjoy a full salary since 2011 while on suspension.

Former policemen and soldiers were behind the attack at the Engcobo police station which left six people dead.
News
3 years ago

Mdluli was facing charges of intimidation, assault and defeating the ends of justice, in the South Gauteng High Court. He was only relieved of his duties by former minister Fikile Mbalula early this year.

"Crime intelligence has been on the news not for good things ... there are stories that it has been used for political ends," Cele said.

"One thing [about the attack] was the lack of intelligence, I'm not denying that."

With just about five days in office, Cele has already met national police commissioner General Khehla John Sitole and would soon also be meeting the acting head of the Hawks, Lieutenant-General Yolisa Matakata, as he familiarises himself with issues within his department.

Cele attended a memorial service for the slain police officers in Engcobo, Eastern Cape, on Tuesday, barely 12 hours after his appointment as Mbalula's replacement.

Banele Mancoba said his brother had not been staying at the church premises before the dramatic shootout with police on Friday night.
News
3 years ago

Cele fired a warning to criminal elements in the country.

"Don't ever take us toe to toe because we will emerge winners," he said.

"Police must not die with guns in their hands. They have to be tough."

Cele said police had to start working closely with communities to tap into information on criminal elements in society.

"We have to win the war against crime. We need to reach a stage where it's abnormal for crime to occur," Cele said.

The church advocated for people not to work and for children not to go to school as “Satan” was said to have taken over the schools.
News
3 years ago

On allegations that he had militarised police during his stint as the top cop, Cele said it takes more than just titles to militarise the police service.

Cele said although he had developed a passion for agriculture during his stint as deputy minister of agriculture, his love for policing remained strong. "Had I grown up in a normal South Africa, I would have become a cop," he said.

Gareth Newham, head of justice and violence prevention programme at the Institute for Security Studies, said it was "a very positive sign" that Cele recognised the need to prioritise fixing the police's crime intelligence division.

Newham said the increasing levels of organised crime, murder and armed robberies since 2012 were an indictment of crime intelligence.