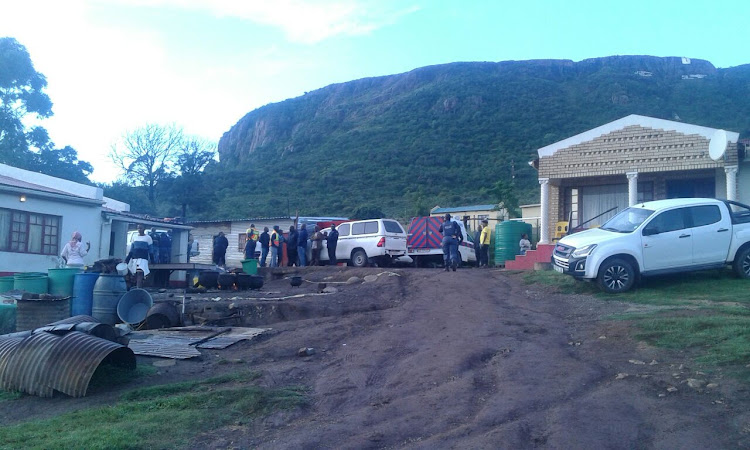 The church, a gang of Eastern Cape police killers used as a base for their deadly crime spree,  is under investigation for operating as an alleged "satanic" cult and will be shut down.

The Seven Angel's Ministries church was the scene of a bloody shootout on Friday night when the alleged murderers refused to surrender to police who surrounded the sprawling complex of zinc shacks and brick buildings.

Their refusal was sent through a hail of gunfire‚ which saw heavily armed officers retaliate‚ killing seven suspects and arresting 10 others.

An unknown number of gunmen‚ armed with automatic rifles‚ managed to escape.

Since Wednesday night‚ a task team comprising of various specialised police units have been tracking the killers of five Ngcobo police station officers and a retired soldier.

The attack on the police station was described as having been carried out with military style precision.

A bloody exchange of gunfire in a churchyard on Friday evening left seven suspected Engcobo cop-killers dead.
News
3 years ago

While some of the gunmen smashed open several ATMs situated close to the police station‚ others stormed the police station's charge office‚ shooting dead three officers inside and stealing firearms. Another officer was killed as he and his partner‚ who was fatally wounded‚ drove into the station grounds. They were shot as they returned from a routine patrol in the town.

Two other officers were shot dead about 6km from the police station and their patrol van taken‚ after they were ambushed and kidnapped by their killers. The retired soldier was killed close to the police station.

Task team members are believed to have discovered the gang's hideout after receiving a tip-off about the arrival of a large group of men at the church on Thursday. The men are alleged to have been hiding out from Wednesday in a cave in a mountain‚ near to where the church is situated. Police forensic experts are currently searching the cave for clues.

In 2016 the church‚ which was initially based in Mthatha’s Mandela Park‚ was investigated by police and social development department officials when 18 children‚ who were allegedly prevented from attending school or having access to healthcare‚ were removed.

Several men have been taken in for questioning regarding the killing of five police officers in Engcobo on Wednesday.
News
3 years ago

Police sources describing Friday night's shootout said that when hostage negotiators tried to convince the suspects to give themselves up‚ the suspects had opened fire from various shacks and buildings on the premises.

Another said that the suspects had used automatic rifles and handguns to try to fight their way out of the compound.

"They had loads of ammunition and were not afraid to use their weapons."

He said that the firefight had been intense.

"It was clear that they were ready for the police. They were spread out in the different shacks and in the two buildings‚ which were set up like hostels sleeping up to 20 people each."

Photographs from the scene show several bodies piled on top of each other in one shack‚ while several others lie just outside the shacks or in rooms within the brick buildings. Firearms‚ can be seen next to the men‚ whose bodies are riddled with multiple bullet wounds. A number of the gunmen were shot in the head.

The officer said that the scene had been complicated by the presence of women and children.

"Miraculously none were killed. More than 70 children were removed from the various buildings‚" said the officer.

Another officer said that a grader had been brought onto the compound to help police forensic officers search the scene.

There's also a cave in the mountain. We don't know what's happening there but there are police who are already there working

He said they believed that there may be firearms caches located on the premises.

"Forensic officers are investigating a number of allegations and looking at exactly how long these suspects have been using the church as a base and the true operations of the church.

He said the church was believed to be a cult.

"They are a close-knit community. Once you are in‚ you are in. There is no escaping their grip."

Police Minister Fikile Mbalula‚ who briefed the public on Saturday‚ described the so-called church and its practices as Satanic.

"This is not a church. This is something else entirely different."

National police commissioner General Khehla Sithole said when they had finished processing the crime scene they would close down the church.

He revealed that police were investigating a nearby cave situated close to the church.

"There's also a cave in the mountain. We don't know what's happening there but there are police who are already there working.”

He said he would not allow the attacks on police officers to continue.

Parliament committee welcomed the breakthrough that resulted in the arrest of 10 individuals suspected in Ngcobo cop killings.
News
3 years ago

Several men have been taken in for questioning regarding the killing of five police officers in Engcobo on Wednesday.
News
3 years ago

A bloody exchange of gunfire in a churchyard on Friday evening left seven suspected Engcobo cop-killers dead.
News
3 years ago

We’re coming for you – dead or alive. That was the message from South Africa’s top cop on Wednesday at ground zero in Engcobo.
News
3 years ago

Former policemen and soldiers were behind the attack at the Engcobo police station which left six people dead.
News
3 years ago
Next Article