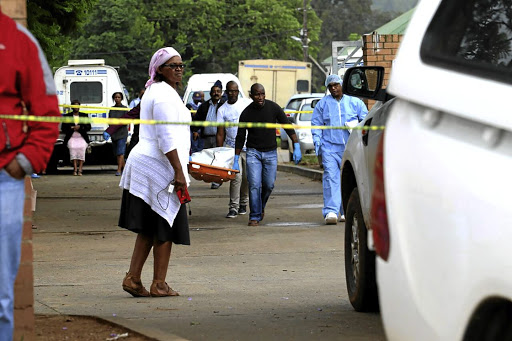 The bodies of murdered police officers are removed from the the scene where armed men attacked the Engcobo police station in Eastern Cape on Wednesday.
Image: MICHAEL PINYANA

Former policemen and soldiers were behind the attack at the Engcobo police station which left six people dead on Wednesday morning .

Speaking at the scene of the attack in Eastern Cape yesterday, Police Minister Fikile Mbalula said: "Some of the criminals are retired police members and military people. You see how they shot here at Engcobo police station they are well trained."

Mbalula gave the police 72 hours to find the killers.

Mbalula described the attack as a national tragedy and "rude awakening to government to ensure that police are protected inside police stations".

Several men have been taken in for questioning regarding the killing of five police officers in Engcobo on Wednesday.
News
4 years ago

"There must be cameras inside police stations and security guards at the gate, fit metal detectors inside so that police can be ready when perpetrators enter and not die like flies."

The minister also confirmed that the attack was the second such incident at the police station in less than a year.

In the deadly raid, gunmen stormed the police station and opened fire on police officers, leaving behind a trail of dead bodies and stole firearms and ammunition.

A police officer was injured in a similar attack in March last year when assailants made off with firearms.

Police investigators suspect that the same gunmen could have been behind the attack. 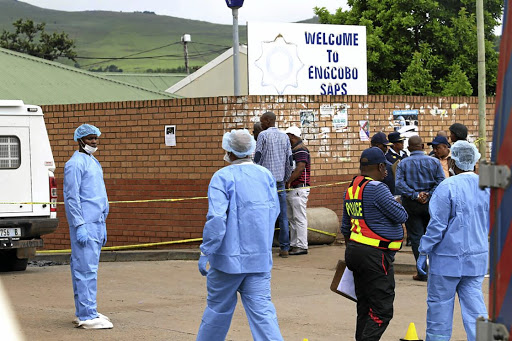 "We are targeted by criminals because we don't have enough police officers in the area. The chief traffic officer was nearly killed by thugs who are yet to be arrested.

"Some police officers have their firearms snatched by thugs in the middle of the town every now and again.

"There's no respect for police," said a police source.

On Wednesday, the police station was a scene of mourning. Officers who were on duty with the slain officers were being interviewed by a task team from national office assigned to the case.

"They won't be released soon as they are getting counselling and they are also being questioned by the officers," said a source.

Minister of Police‚ Fikile Mbalula‚ is furious at suspected robbers attacking a police station in the Eastern Cape‚ during which six people were ...
News
4 years ago

As the suspects were fleeing, they shot dead a retired soldier and made off with one of the police cars, and abducted two officers, whose bodies were later recovered a few
kilometres from the police station.

Five other female members were given trauma counselling.

"Approximately 6km from the police station along a road, the bodies of both the members were found with gunshot wounds.

"The state vehicle has been recovered," Tonjeni said.

National police commissioner General Khehla Sitole said a multi-disciplinary investigative task team backed by a special tracking team has been set up to hunt down the criminals who carried out the attack.