How live stream classes are helping to change lives 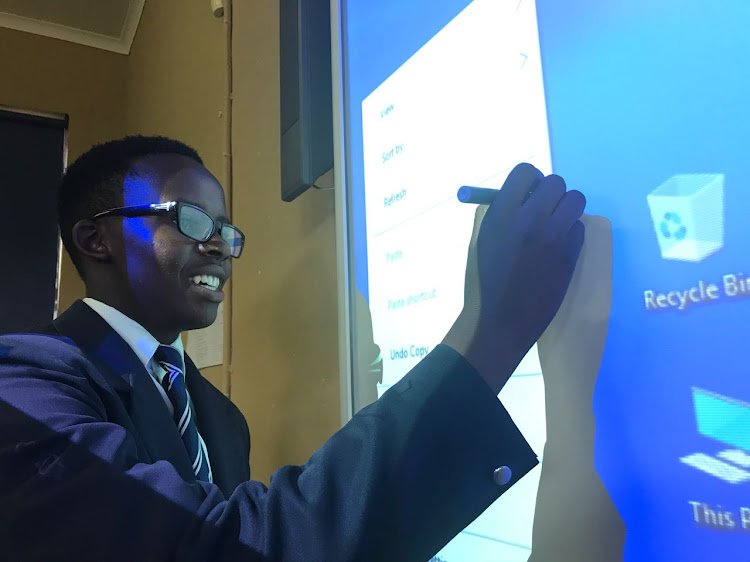 Melikhaya Jacobs works on an interactive smart board in his classroom in rural KZN.

Melikhaya Jacobs’ smile is bathed in bright blue light emitted from a screen in his rural KwaZulu-Natal classroom that he hopes will forever change the course of his life.

This interactive smart board‚ along with a stable internet connection‚ allows science and maths lessons to be beamed into his classroom from a different province.

The Shea O’Connor Combined School has been propelled to the forefront of e-learning – a far cry from the worn floors and leaking classroom roofs that house the state of the art laboratory.

Jacobs‚ a 19-year-old matric hopeful‚ is among the first in the province to be inducted into the Ligbron e-learning programme which sees maths and science classes live-streamed from the Ligbron Academy studio in Mpumalanga to 30 underperforming or rural schools around the country.

This technological advancement‚ he says‚ can boost his results at school and one day help him build a double-storey home for his family.

Learners in each school communicate by video link‚ and can even write on their interactive board.

The scheduled classes have to log in for lessons as per an attendance register monitored by a central control hub in Ermelo. Class notes and learning material are circulated via dropbox‚ loaded two days ahead of the scheduled class.

School Principal Nicholas Nxumalo said that the project‚ funded by donors‚ would have a significant impact in the lives of his pupils.

“We want to welcome this with both hands. Our school‚ being a quintile 1 school‚ is one that is struggling‚” he said.

“Having this state of the art facility gives our community and our learners an opportunity to see what we can do‚ perhaps to further explore their potential.”

Nxumalo outlined the challenges facing his school‚ painting a picture of overcrowding and under-resourcing.

“We have a shortage of classrooms which has forced us to convert a library into a classroom for mathematics. The enrolment in grade 12 is such that in one classroom we have 64 learners‚” he said. “The teachers are overloaded when it comes to marking and engaging with the learners. I am hopeful that this project will make a huge difference in elevating the academic performance and it will further boost the morale of our teachers‚” Nxumalo added.

The mere presence of the high-tech labs and the smart boards made pupils eager to come to school‚ he said.

A school girl at the centre of a sex scandal might have left the institution several years ago.
News
3 years ago

Gauteng education MEC Panyaza Lesufi is not taking the temperate approach of Basic Education Minister Angie Motshekga towards the implementation of ...
News
3 years ago

School stationery worth hundreds sold for R69 in Eastern Cape

Bhisho committee members were gobsmacked on a visit to a school in Addo on Tuesday when they found that a shop was selling stationery supplies issued ...
News
3 years ago

Nokwazi Dlamini said she is planning to go back to school to finish her basic education after 23 years.
Lifestyle
3 years ago
Next Article