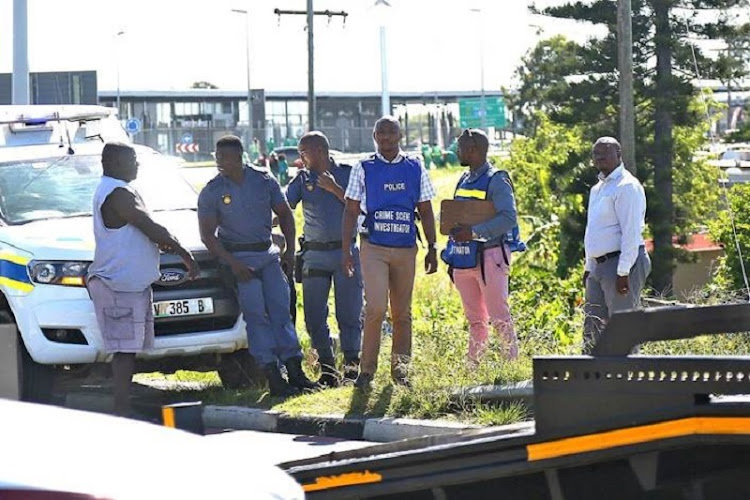 Beacon Bay Police at the scene, near Nompumelelo, where the body of a woman was found this morning.
Image: MARK ANDREWS © DAILY DISPATCH

An inquest docket has been opened by the Beacon Bay police following the discovery of a woman’s body on an embankment near the busy traffic circle on the N6 in Beacon Bay‚ East London.

The body was recovered on Thursday morning at 8.30am.

The woman has been identified as 55-year-old Nomvulo Rayi from Nompumelelo Township.

Her son Fundile Rayi‚ 37‚ said his mother left home on Wednesday for her boyfriend's home. “He came in this morning before 8am and told me that my mom's body was found there. We don't know what happened. There are no visible scars on her body. He said he didn't see her last night‚” said Rayi. East London police spokeswoman Warrant Officer Hazel Mqala said no foul play was suspected at this stage.

While DispatchLIVE was talking to Rayi at the scene‚ three Beacon Bay police detectives intervened and prevented the interview from continuing and photographs from being taken.

The family of 17-year-old Nqobile Nzuza‚ who was shot dead by a policeman during a 2013 housing protest in Cato Manor near Durban‚ will have to wait ...
News
4 years ago

Provincial police spokeswoman Colonel Sibongile Soci said: “It is regrettable to note that reporters are treated unfairly at crime scenes despite several communications to the members to conduct themselves in accordance to the SAPS Code of Conduct at all times. Reporters are also advised to approach crime scenes with caution‚ allow the police to conduct their investigation without interference and comply with the instructions of the member in charge of the crime scene.”

One of the detectives could be heard telling his peers that he would assault photographer Mark Andrews when he continued taking photographs.

"I will kick this guy‚ just watch and see."

The detectives claimed that the family members the DispatchLIVE reporter wanted to interview‚ were their witnesses in the inquest and that DispatchLIVE would "leak" evidence and jeopardise the investigation.