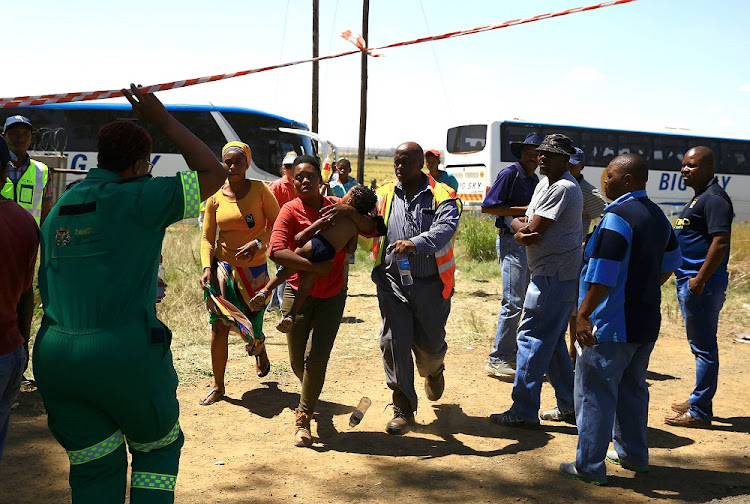 A small child is taken from one of at least six buses brought in to transport passengers to an ambulance — apparently a victim of heatstroke.
Image: Simphiwe Nkwali

A small child is taken from one of at least six buses brought in to transport passengers to an ambulance - apparently a victim of heatstroke.

Four hours after the Shosholoza Meyl smashed into a truck at a low level crossing near Hennenman‚ accident investigators are hard at work sifting through the debris‚ trying to determine the cause of the crash.

So far‚ according to Free State health department officials‚ 12 people have been declared dead. The number may rise however‚ amid conflicting reports about the death toll from the scene.

While it is not yet clear how‚ a small car was also involved.

One passenger said the train‚ which departed from Port Elizabeth bound for Johannesburg on Wednesday afternoon‚ was blowing its horn long before the jarring impact. Video footage shows a scene shrouded in smoke‚ the wrecked train looming in the background‚ as passengers help each other move away from the heat of the flames.

Mthuthuzeli Swartz‚ acting CEO of Prasa Rail who rushed to the scene‚ explained that the accident was caused by a truck which did not stop at the crossing. He could only confirm six deaths.

Rescuers are still combing the wreckage for bodies.

According to Swartz‚ 713 passengers were booked on the train. 254 were injured of which four are critical‚ 23 in a serious condition and the remainder treated for minor injuries.

A statement issued by PRASA however said 429 passengers were onboard.

Swartz also said food and water was arranged for the passengers who would be transported by bus to their destination. The buses departed shortly thereafter.

Transport Minister Joe Mswanganyi was expected to arrive at the accident scene later on Thursday.

Tiaan Esterhuizen‚ who was returning to Gauteng from his holiday with eight family members‚said that he was having breakfast in the restaurant car when he felt a massive jerk and heard screams.

Unbeknown to him at the time‚ the train had collided with a truck and a car.

More footage of the @Shosholoza_Meyl derailment near Kroonstad. Passengers struggling with their luggage as the train burns. Video by Tiaan Esterhuizen. pic.twitter.com/WaWCjIchUn

“I rushed back to my wife‚ who was quite far back on the train. She was with our small baby but fortunately only the luggage had fallen off the racks and she had managed to cover him with her body‚” he said.

Esterhuizen then gathered his family and disembarked.

“I saw around twelve cars on their side and one was already burning. We heard some women screaming when we came closer so a few of us climbed over the cars to investigate.”

He was greeted by a horrific scene.

Three women were trapped by the mangled wreckage of the train carriage‚ unable to move.

“Two of the women were sort of on top of each other. Another was further back. Her legs were trapped.”

One of the women was shouting that there was a baby inside also.

“We searched but could not find the child‚” he said.

By that time the flames had become so fierce‚ he and the others were forced to retreat.

“We used some fire extinguishers the police had‚ but it didn’t work. I am quite sure those women burned to death‚” he said.

“It was a terrible‚ terrible experience.”

Four people have died after a Shosholoza Meyl train collided with a truck and a car on Thursday.