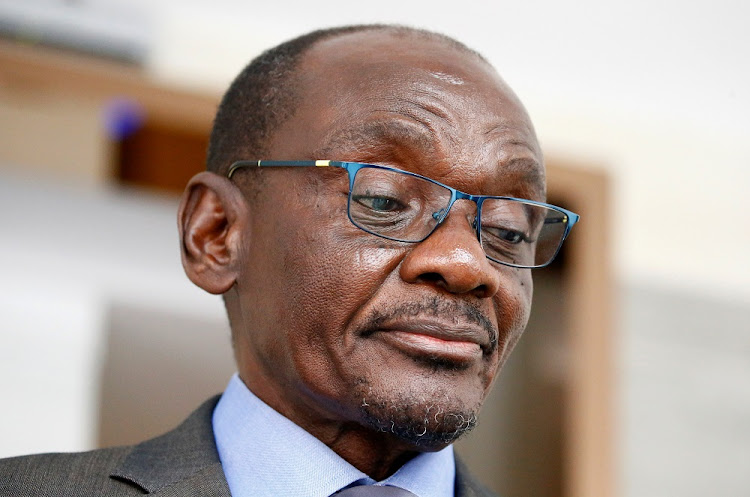 Zimbabwean vice-president Kembo Mohadi says his enemies are out to get him. File photo.
Image: REUTERS/ FELINE LIM

Zimbabwe’s co-vice-president Kembo Mohadi is adamant that political enemies are out to get him by cloning his voice and creating non-existent sex scandals.

Speaking for the first time after a series of exposès by online publication ZimLive that allegedly linked him to two married women and a former beneficiary, Mohadi issued a statement hinting at an internal Zanu-PF war.

“Despite growing impatient because of days of weird character assassinations, I wish to categorically state that the allegations being levelled against me are not only false, but well-choreographed to demean, condescend and soil my image as a national leader and patriot,” he said.

ZimLive published articles accompanied by alleged telephone conversations between the vice-president and women purportedly canvassing for sexual favours. Some of the conversations featured vulgar language.

In the first exposè it was claimed that a woman’s husband had a heated exchange of words with the vice-president at his residence in Harare after he discovered they had been intimate. The woman is reportedly a security aide attached to his office.

The highly publicised “scandal” has since forced some women’s rights groups to call for Mohadi to step down. But he is preparing for the fight of his political career.

Despite the noise in digital media ecologies, I wish to clearly state I am innocent and a victim of political machinations being peddled through hacking and voice cloning

“Despite the noise in digital media ecologies, I wish to clearly state I am innocent and a victim of political machinations being peddled through hacking and voice cloning,” he said.

He added that the leaks would not “dampen my spirit as a tried and tested cadre”.

Mohadi is the co-vice-president occupying the slot reserved for former PF Zapu members as per the 1987 Unity Accord agreement. Since the death of Joshua Nkomo in 1999, there have been three occupants (Mohadi is the fourth) in the position, which has been fiercely contested over the years.

Long-serving DA MP and the party's former deputy chief whip, Mike Waters, has resigned as a MP.
News
1 year ago

Patricia Kopane staying put in DA, despite stepping down from position

DA Free State leader Patricia Kopane says she is not leaving the party, despite announcing that she will not be standing for another term.
News
1 year ago
Next Article