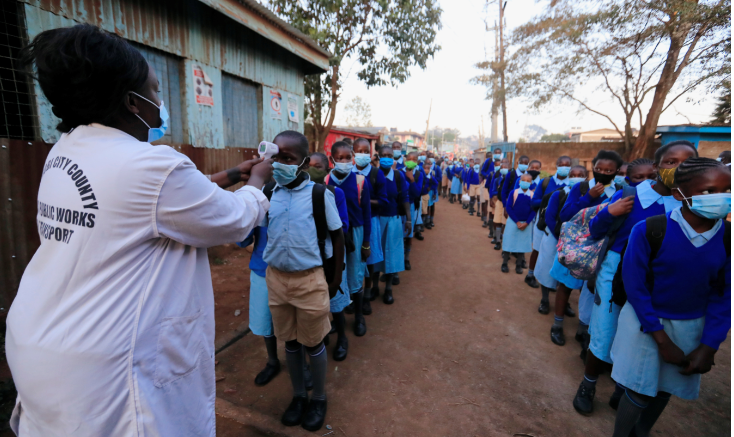 A worker checks the temperature of school children before entering the Olympic Primary School during the reopening of schools, after the government closed learning institutions due to the coronavirus disease outbreak, in Kibera slums of Nairobi, Kenya January 4, 2021.
Image: REUTERS/Thomas Mukoya

Hundreds of children formed an orderly queue that snaked through Nairobi's biggest slum Kibera on Monday, waiting to enter classrooms for the first time since March, when the government closed schools after Kenya reported its first Covid-19 case.

The country is the last in East Africa to fully reopen its schools. Children in grades four, eight and 12 returned to class in October so they could prepare for exams postponed amid the pandemic.

The World Health Organisation and the UN children’s agency UNICEF say prolonged school closures due to Covid-19 present many risks for children in poor countries. Higher rates of teenage pregnancy, poor nutrition, and permanent drop outs from school are among the dangers.

Most boys and girls wore masks as they stood outside the Olympic Primary School's gates, waiting their turn as school officials took temperatures and squirted hand sanitiser into their palms.

The real danger, however, lurked inside.

"The government has said our children must go, but they are not safe according to how I see it," said 54-year-old parent Maurice Oduor, questioning how social distancing can be practised with about 100 students squeeze into each room.

"There are no classrooms built and no desks added here," he added.

When the children sat down for class, they were shoulder to shoulder, three at a desk, as they were before the pandemic.

School administrators and teachers told Reuters they were not authorised to speak to press.

The government has tried to ensure the safety of students and teachers by distributing more than half a million desks to schools and supplies of soap, Education Minister George Magoha said on Sunday.

Kenya's Covid-19 cases began surging in October and peaked in November at the relatively low rate of 972 cases per day, according to a Reuters tracker. The country has recorded a total of 1,685 deaths and 96,802 cases, Health Ministry data showed on Sunday. Testing is limited.

Another parent, Maureen Adhiambo, said she was grateful her children had avoided the virus and were able to return to school on Monday. Her neighbour's teenage son recently collapsed with breathing problems and died, in what the family believes was an unconfirmed case of Covid-19.

"Our school is overcrowded, that is my biggest concern in bringing my children back," the 34-year-old said.