Some hope for Diepsloot as residents welcome Cele's interventions 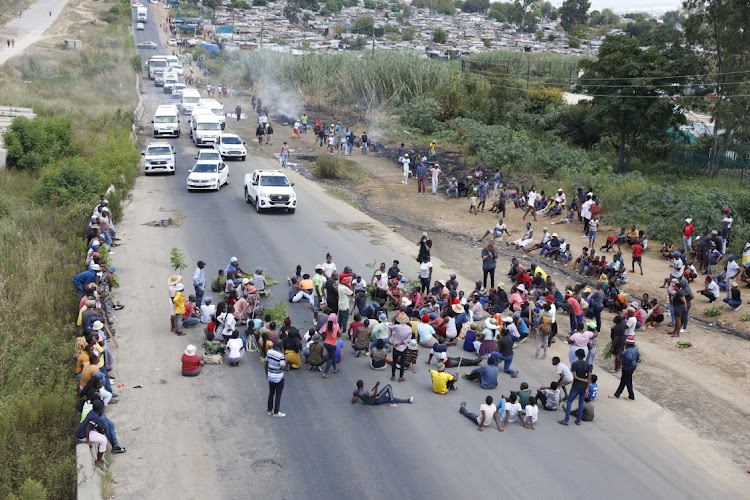 SOdiepsloot0504__N0A9513 Diepsloot residents protesting on Wednesday about the high crime rate in the area. On Thursday some said they welcomed the interventions of police minister Bheki Cele.
Image: Thulani Mbele

Some residents of Diepsloot have welcomed the interventions of police minister Bheki Cele, saying he had delivered on what he had promised.

When visiting the township on Wednesday, Cele promised that the government would add resources to strengthen crime fighting in the area.

A member of the community policing forum (CPF), Kutlwano Moalusi, confirmed to TimesLIVE that 10 police vans were delivered on Thursday. "Those are from Cele's office. We are now waiting for the six vehicles from the province," he said.

Moalusi expressed satisfaction with the delivery, saying it was encouraging to see that Cele was "not just talk".

"This is a step in the right direction. What we need to work towards now is sustainability. We have these resources. Now we need to make sure that they remain here and not be gone in a week or two."

Moalusi said crime in the area was out of hand, with it being common that people are killed in robberies.

"It's sad to see that we are under siege like this. It's no longer safe to be out after sunset."

Another resident, Martha Mthimkhulu, said she was happy to see the police deployed in the area and busy with patrols.

"Amabarete [TRT police] take no nonsense from anyone and I know they will get rid of criminals roaming our streets," she said. "My faith is in them and I thank minister Cele for sending so may cops to our area."

This was in stark contrast to Wednesday, when there was a total shutdown with some interruptions at schools. Some had been unable to go to work as residents said they wanted to deal collectively with the crime crisis.

Although the CPF was not behind the shutdown, according to Moalusi they were also concerned that crime was getting out of control.

He said on Sunday they woke up to news that four people were found dead in different parts of Extension 1. The deceased were alleged to have been shot.

Extension 1 is where Elvis Nyathi, a Zimbabwean national, was killed on Wednesday night, allegedly by a mob demanding to see foreigners' documentation.

"Criminals always take advantage of the fact that it's dark in Extension 1. There are no street lights. They are there but have not been working for a while now, so criminals use the darkness to their advantage," Moalusi said, adding that they had asked Gauteng premier David Makhura to urgently see to it that the lights get fixed.

On Thursday afternoon a strong police presence remained in the area, with police nyalas and other vehicles patrolling the streets.

The weekend's killings of two people and police's alleged refusal to attend to one scene, citing danger, appears to be what sparked the shutdown in ...
News
1 month ago

Cele calls in cavalry to deal with rampant Diepsloot crime

Police minister Bheki Cele has promised to deal with crime in Diepsloot by bringing in 16 patrolling vehicles and deploying detectives to investigate ...
News
1 month ago
Next Article