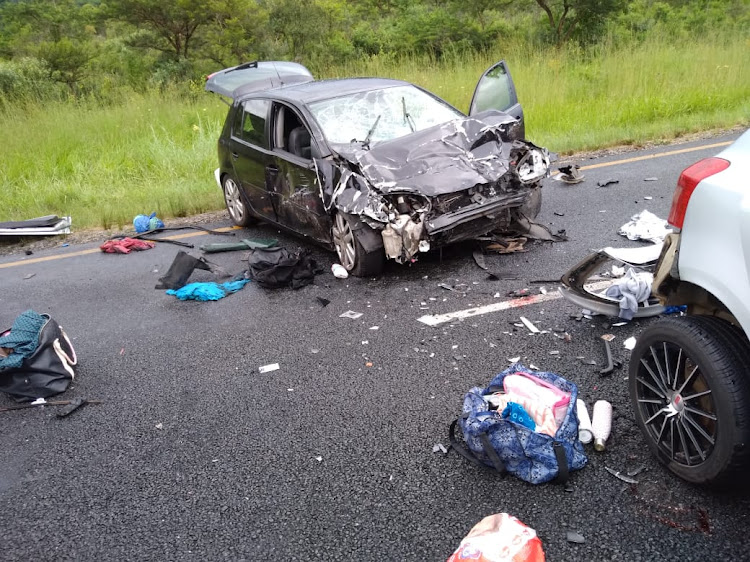 Accident scene along the N4 near Schoemanskloof in Mpumalanga. The death toll has risen to 6 following the death of a toddler in hospital.
Image: Supplied

An 18 months old baby has died in hospital, bringing to six the number of people who perished following Monday's crash along the N4 near Schoemanskloof in Mpumalanga.

“The number of the fatalities in yesterday's N4 toll road crash near Schoemanskloof has risen to six [after] one of the children, aged 18 months, succumbed to injuries at Rob Ferreira Hospital (in Mbombela)," Mmusi said.

On Monday, he said five people had been killed when a Toyota sedan and a Volkswagen hatchback collided.

He said all five who died at the scene were occupants in one vehicle.

The baby was among three people who were seriously injured following the accident.

“It is believed that the crash happened when the driver of one of the vehicles lost control, veered into oncoming traffic and crashed into the side of the vehicle that was coming from the opposite direction. The investigation into this crash is already underway,” Mmusi said.

Four people were killed and 28 others were when a bus and a truck crashed in Jacobs, south of Durban, on Wednesday afternoon.
News
5 months ago

Taking the stand in his trial for the first time since 2018, Scott-Crossley lost his temper in court and ordered his lawyer to stop talking as he ...
News
5 months ago
Next Article