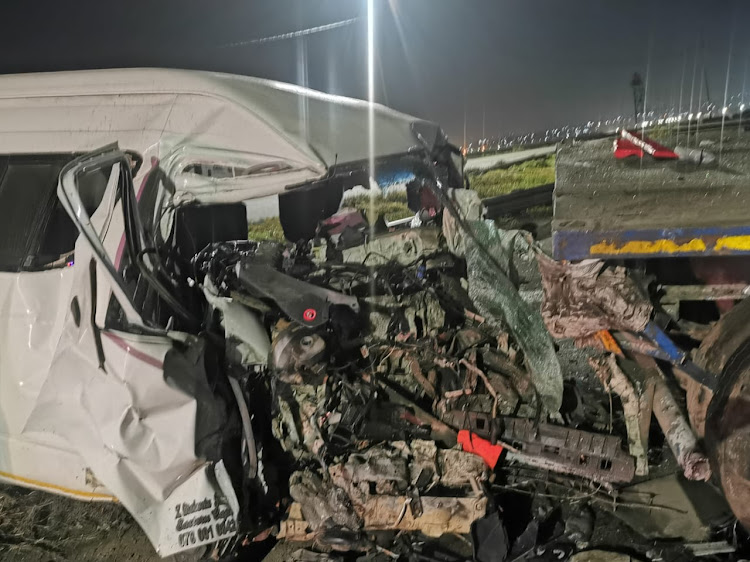 Two people died in an accident involving two trucks and a taxi in the N2 on the early hours of Wednesday
Image: Supplied

Two people were killed in an accident involving two trucks and a taxi on the N2 and M4 intersection in Gqeberha in the early hours of Wednesday morning.

According to Provincial traffic spokesperson Unathi Binqose the accident allegedly happened after one of the trucks drove into the rear of the other. The trucks were travelling in the same direction towards Cape Town.

It is alleged the cargo trailer from one of the trucks obstructed the opposite lane leading to a secondary collision with an oncoming taxi.

Both truck drivers survived the accident.

The taxi driver died while emergency rescue personnel were trying to remove him from the vehicle.

One of the two taxi passengers died on arrival at hospital while the other one has been admitted with serious injuries.

“The circumstances surrounding the cause of the accident are still unknown at this stage as the incident is still under investigation,” Binqose said.

“ A case of culpable homicide will be opened at Mount Road SAPS for further investigations.”

Three people died in a horror crash between a truck and a car on the N3 on Wednesday morning.
News
5 months ago

A driver who clocked 207km/h, exceeding the prescribed limit, is among 18 motorists arrested for excessive speeding by the Gauteng traffic police’s ...
News
5 months ago

More than 2,000 cars an hour expected on N3 as holidaymakers rush to coast

The N3 Toll Concession recommends motorists plan their routes prior to departing on holiday and stay informed of road and traffic conditions.
News
5 months ago

Poor weather and driving under the influence of alcohol are some of the factors behind recent fatal car crashes.
News
5 months ago
Next Article