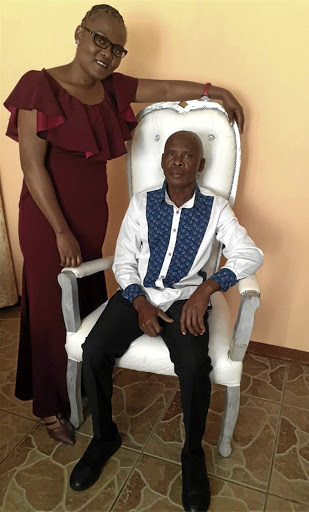 Sowetan recently ran a Fathers' Day competition for our readers to celebrate the men who raised them.

From a great number of entries, Thoko Mkalipi and her father Elliot Mkalipi were chosen as the winners.

It was Thoko's letter describing her loving father and the role he has played in her life that won the hearts of the judges.

"I am his 38-year-old daughter, staying at my own place but when I decide to sleep at home, he will wake up, pour some warm water for me to bath. He wakes me and make a lunch box for me, then go [and] warm the car for me and take it out of the garage.

"We will pray before I go to work, then he opens the gate for me and we say our goodbye.

"Then he will start preparing for his grandchildren to go to school," she wrote, describing her hands-on dad.

Thoko's father also seems to be embracing growing old and even jokes about it.

"He calls himself Sassa as he is getting the grant money. He is our superhero," she wrote.

Sowetan called the father and daughter duo to hear more about their relationship.

Ntate Mkalipi may be from the older generation, but the 61-year-old believes that gender roles in parenting need to be dismantled.

While his wife Josephine would leave home in the early morning to go to her retail job, he would help his three children prepare for their school day.

"My mom was a very busy woman and my dad would prepare everything for us," said Thoko proudly.

"He would bath us, make our food and do everything for us." Mkalipi, who lives in Soshanguve, north of Pretoria, said although back in his day this was seen as a woman's job, he did not see anything wrong with being a hands-on father.

"It's very important to take care of your children. I would prepare them for school then I would take them there before I went to work," he said.

Mkalipi is now retired after working as a driver for a company. He is now enjoying being a grandfather and a pillar of his community.

He said his biggest hope for absent fathers is to realise that they are missing out on the most important relationship in their life.

"My advice is for them to realise that children are blessings from God," he said.

He said he has also seen how children are being neglected during the Covid -19 pandemic and wishes that parents would take extra care by making sure their children are safe at home and not roaming the streets.

Thoko told Sowetan that he is showing the same care to his grandchildren now that he is retired.

"He also looks after his grandchildren the way he looked after us.

"Even now when I visit, he still treats me like a little girl."

Thoko added that today she is a good mother to her three sons because of the lessons she learnt from her father.

"He taught me how to make sure they know what is right and wrong and how to respect elders."

Thoko's winning letter won her and her father a R2,000 Dischem shopping voucher as well as two Nokia 2.3 cellphones.

WIN | Share your Newlands memory & win prizes worth up to R5,000 or a call from a rugby star