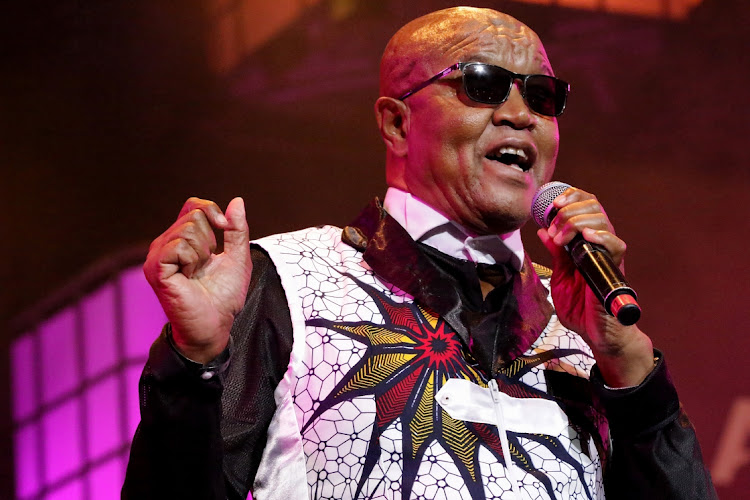 Steve Kekana was a trailblazing recording artist and performer during the soul/disco era. He was also a go-getter in other fields at a time when the odds were stacked against black people, who were not expected to achieve anything beyond being hewers of wood and drawers of water.

He was one of the dominant figures on the local and international scene in the 1980s and went on to become a pioneering voice of talk radio and a top legal eagle in the 1990s.

In the 80s, he founded and managed a football club named Steve Bees and later taught law at a university. Remarkable achievements for someone who lost his eyesight in early childhood.

“I believe I am a musician by nature. It is something that was ordained by God. But I have always wanted to be a lawyer. I was only 14 when an elder brother, Joseph Malatji, enrolled for a law degree at Turfloop University in 1972. That really cemented my resolve to become a lawyer like him,” Kekana said.

Born in Bolahlakgomo village in the Zebediela/Moletlane district,he lost his eyesight at the age of five after suffering from glaucoma, an eye condition that causes gradual loss of eyesight. He became a pupil at Siloe School for the Blind at Chuenespoort, Polokwane, where he proved to be academically gifted as well as musically talented.

Like his American idol and namesake, Stevie Wonder, he was a child prodigy and found inspiration in the success of other visually impaired musicians such as Babsy Mlangeni, Jimmy Mojapelo, Koloi Lebona, Munich Sibiya and John Mothopeng – all of them members of The All Rounders and versatile artists individually and collectively.

From these remarkable artists he learnt that blindness was a state of mind than a disability.

After completing matric in 1976, his mother, a single parent of five children, didn’t have funds to put him through university to pursue law studies.

Then he met renowned talent scout EMI’s Tom Vuma, who took him to Johannesburg where he recorded his first album, Mumsy (EMI, 1978). It became an instant best-seller, earning him the 1979 and 1980 SABC Black Music Awards for best male vocalist.

His first English album, Don’t Stop the Music (1981), is a documentary film soundtrack of the same name in which he starred alongside the incomparable and irrepressible radio personality Cocky ‘Two-Bull’ Tlhotlhalemaje and modern dance international champion Godfrey Raseroka.

The success of Don’t Stop the Music – which contained hits like Raising My Family and Shine On (Brightly) – saw Kekana touring Scandinavian countries in 1982. Also in 1981 chart-toppers like Iphupho (Zulu), Mandla (Zulu) and Abuti Thabiso (Sotho) earned Kekana Radio Zulu’s top male vocalist and runner-up in the same category on Radio Sesotho and Radio Setswana.

No dust gathers on Steve Kekana

When Dr Steve Kekana’s first song, Mamsy, hit the airwaves in 1978, teenagers from his village in Zebediela, Limpopo, ran out of their school to jive ...
Entertainment
1 year ago

In a country whose politics were defined by race and laws of racial segregation, the state-run SABC forbade black musicians from recording songs in English and Afrikaans – languages reserved for the so-called superior race.

Kekana was one of the few black artists at the time who dared buck the system’s unjust dictates. Not only did he record in English, Kekana also dared to sing with a white woman, an act that was seriously frowned on by the apartheid establishment.

Feels So Strong, a hit duet with PJ Powers, earned the duo a double gold disc award after reaching number six on the predominantly white Springbok Radio's Top 20 hit parade and subsequently a European tour that included Holland, England, Germany and Italy with the Hotline frontman.

The two met in 1982 at Downtown Studios in Johannesburg when Kekana was recording a Zulu album.

Another meeting at the Colloseum during a Hotline show led to the decision to record together. Another English language crossover pop hit, The Bushman – from the album Don’t Stop the Music – reached number 13 on the aforementioned station's Top 20 charts.

Kekana’s voice can also be heard on Sipho Mabuse’s Burn Out – undoubtedly the biggest crossover pop and international success to have come out of the eighties and still one of the perennial favourites from that golden era of South African pop; Take Your Love and Keep It – a collaboration  with Nana ‘Coyote’ Motijoane and one of the best-loved and evergreen duets ever recorded on the South African pop scene.

In 2004, they took their working partnership to another level when they recorded the album, My Pride, My Joy with Joe Nina as members of The Trio. The album features Tsepo ‘The Village Pope’ Tshola on vocals and Hugh Masekela on trumpet and includes two versions of Take Your Love And Keep It – originally created by Stimela keyboardist Lloyd Lelosa and Kekana.

In an illustrious career spanning four decades, he has released over 40 albums, which include 16 Zulu albums, seven in Sesotho, eight in English and 11 gospel albums. “I learnt to speak Zulu by listening to radio adverts. Recording in Zulu was a standard requirement if you wanted to be a professional artist in those days. And I just perfected the accent by imitating native speakers,” recalls the artist who grew up speaking Sepedi and northern Ndebele.

However, in 1986 an unfortunate incident would blemish his relatively smooth running career.

It was a turbulent time politically, the era of the comrades who often took the law into their own hands. His Soweto home was petrol-bombed after he was accused of having participated in a government-sponsored show and recording project with fellow musicians that included Abigail Kubeka, Blondie Makhene and Ricardo.

But he bounced back. After 22 years in the industry, he finally realised his ambition of being a lawyer. The opportunity occurred in 1992 when he applied for a job as a talk-show host with Radio Lebowa (now Thobela FM).

For a visually impaired person, the studio technician who was assigned to show him the ropes was astounded when barely a week later, the singer had adapted incredibly well to his new surroundings and mastering the electronic gadgets.

The singer was also a qualified telephone operator, having trained at Itireleng Blind Institution in Ga-Rankuwa, Pretoria.

He completed his junior degree in jurisprudence in record time of three years and finished his LLB in 1999 – also in record time.

As part of his degree requirements, he wrote a dissertation on copyright law, with focus on copyright infringement in South Africa – a subject very close to his heart and a serious problem in the industry as it was demonstrated by the celebrated case of Simon Linda’s internationally famous song, Mbube (The Lion Sleeps Tonight).

The plight and rights of artists defined his activism. He became a regular at the old Cosatu House in the Johannesburg CBD where he would raise matters of concern such as copyright, royalties and the overall wellbeing of musicians.

His series of workshops on entertainment law and the business of music benefited a new generation of artists.

“The industry is riddled with corruption and abuse of artists. For years recording artists performed and recorded but without knowing their rights. And not knowing one’s rights is equal to not having rights – so record companies have consistently taken advantage of this ignorance. And those who don’t know their rights can’t run a business because they don’t see music as their intellectual property. I too was exploited because I had no access to statements as there was no transparency,” Kekana said.

He is survived by his wife and two children.

A memorial service will be held tomorrow at the Polokwane City Hall from midday.

Famous for hits such as Take your Love, the legendary musician died on Thursday morning at the age of 62 after Covid-19 complications.
Entertainment
10 months ago