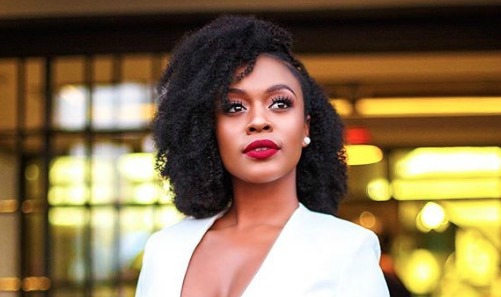 “There can be no equal future without the full and equal participation of all women and girls everywhere and this is the generation to accomplish that.”

There are the words of actress and champion for gender equality and goodwill ambassador for the UN High Commissioner for Refugees (UNHCR), Nomzamo Mbatha.

The former Isibaya actress was speaking at the 75th UN General Assembly at the weekend where she was invited by the president, Volkan Bozkir.

This year's conference was held in Beijing, China, under the theme “accelerating the realisation of gender equality and the empowerment of all women and girls everywhere”.

In her moving speech, Nomzamo said the world has a long way to go to achieve gender equality.

“Twenty-five years ago in Beijing, China, the world made a promise ... equal rights and opportunities for women and girls everywhere,” said Nomzamo.

“Twenty-five years later, the Beijing platform of action remains a cornerstone of the UN’s work to uphold the rights of women and girls, including women and girls who have been forced to flee their homes because of violence and conflict or persecution.”

“At the end of 2019, millions of people were forced to flee their homes because of conflict, persecution, and violence. More than half of them were women and girls, many of them at risk of discrimination, violence, child marriage, and lack of access to quality education.”

Nomzamo said the Covid-19 pandemic had worsened inequality for many young girls and the LGBTQI+ community.

She said, because of the social and economic impact of the pandemic, many displaced young girls and women were at an increased risk of being forced into survival sex and early child marriage.

“But forcibly displaced women are agents of change, challenging the status quo and fighting [for] girls' rights and using their voices to demand equality.”

This is not the first time Nomzamo has delivered a moving speech at the UN. In 2017, after she was selected as an ambassador, she vowed to be the voice for the

“Our purpose is not to take pictures and glamourise the face of loss, displacement and helplessness. Ours is to show the face of resilience, light, love and to give it a new light, a new narrative and a new hope,” she said.

“We will be the voice to those perceived to be voiceless, homeless, hopeless and without refuge. Destitution will have to find a new home because it won't be here in Africa.”

In 2018, while in Nairobi, Kenya, Nomzamo said her visit with refugee women was upmost in her mind.

“Their strength, their ability to overcome, and their ingenuity for making the best of a difficult situation is what I celebrate,” she said.