Cheating drama attracts the most viewers on TV 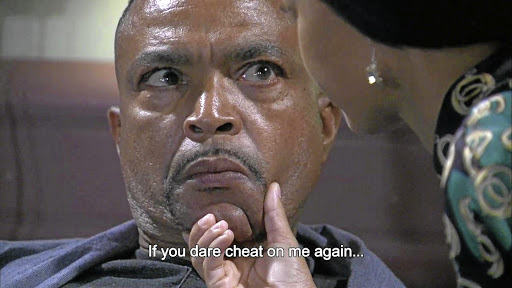 Marothi (Macks Papo) is wide-eyed as wife Rachel spells it out to him.

"If you dare cheat on me again I'll kill you."

These words, uttered by Rachel Kunutu (Lesego Marakalla) in a scene with Marothi (Macks Papo) in Skeem Saam on SABC 1 on May 12, not only went viral but also delivered the biggest audience ratings for the soapie.

According to the latest data by the Broadcast Research Council of South Africa, the episode earned the soapie a record viewership of more than 9-million for the first time since its inception in 2011.

"This means that we are being watched, understood and that we are being listened to. We learn new things all the time. And at times we are able to identify what stories or characters resonate most with the viewers," Skeem Saam spokesperson Sumaya Mogola said.

"We will continue to tell our stories the best way we know how. Hoping we can keep our everyday viewers but at the same time win some new hearts as well."

Marakalla and Papo said they were over the moon that the cheating storyline was such a hit with viewers.

In the show, Rachel catches her husband Marothi cheating and decides to poison him as payback, resulting in him being hospitalised.

"I think it's a great storyline and the viewers couldn't wait to see what's going to happen next. How long will Marothi be able to keep his cheating secret and what will Rachel do when she finds out," Marakalla said.

Papo added: "It rang very true to real life marriage situations out there. Secondly, [it was] a perfect timing during the lockdown period when a whole lot of people would be at home, stressed, some even depressed and in great need of television entertainment."

Malinga says he may have to use Papgeld to go after Jub Jub if he doesn't stop exposing cheaters!
Entertainment
3 years ago

Cheating drama also delivered success on DStv as Uyajola 9/9 surged to the top with 2.54-million viewers.

This is the highest rating number seen by novice channel Moja Love since it launched in February 2018.

The winning episode saw fists fly when Jub Jub confronted a man caught cheating on his girlfriend with another man.

"The ratings are an indication that the channel is growing viewership which is great," head of channel Bokani Moyo said.

"The shows' content resonates with the viewers and it reflects the extent of some of the social issues which affect communities on a daily basis." The show has also been criticised by some as exploiting black lives.

After registering all-time ratings high of over 11-million viewers in April, Uzalo dropped to 10.59-million.

Despite being off air for half the month after running out of new episodes to flight, the show retained its top spot as the most-watched TV show in SA.