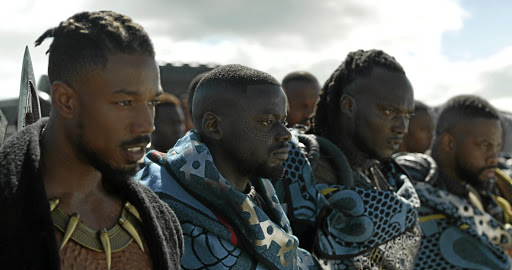 Erik Killmonger (Michael B. Jordan) and W'Kabi (Daniel Kaluuya) with some of his border tribesman./Marvel Studios

Spearheaded by three of the greatest names of modern cinema - Chadwick Boseman, Michael B. Jordan and Lupita Nyong'o - the Marvel film is a blast of Black power and pride.

He is quickly tested when he is drawn into a conflict that puts the fate of Wakanda and the entire world at risk.

It boasts a 95% black cast that in addition to the aforementioned names includes Angela Bassett, Daniel Kaluuya, Letitia Wright, Florence Kasumba, Atandwa Kani, Forest Whitaker and Connie Chiume. This makes it the first comic book movie of its kind.

I haven’t been to the mountain and I haven’t been oppressed. But I saw something in Black Panther that made me proud to be an African.
Entertainment
3 years ago

The film is brilliantly packaged, visually electric and highly entertaining. The high-octane action sequences will have your heart racing.

The wardrobe and hair celebrate Africa's rainbow culture, with the sartorial picks of costume designer Ruth E. Carter borrowing from various African cultures, but given a Sci-Fi twist.

Watch out for glimpses of traditional Basotho blankets and the Zulu isicholo.

The young character of Shuri (Wright) is as obsessed with gqom as we all are.

As Babes Wodumo's Wololo plays in one scene, it's hard to exercise decorum and not vosho in the cinema. Xhosa is the official language of Wakanda and the international stars fall flat with their cringe-worthy pronunciation.