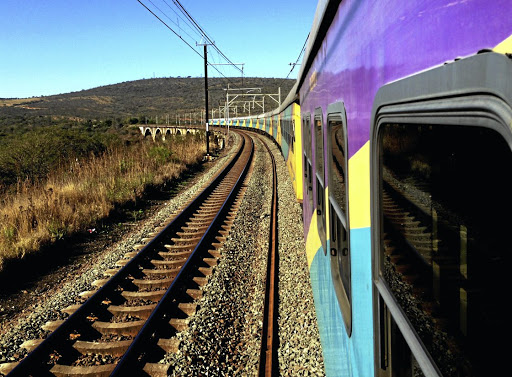 Prasa's Shosholoza Meyl passenger trains are due to start running on four routes, with the first starting from December 15.
Image: Supplied

The Passenger Rail Agency of SA's (Prasa) long-distance passenger trains are due to begin operating from December 15 after almost a year's absence.

Times and dates of the revived Shosholoza Meyl services were announced on Wednesday, with trains departing in each direction from Johannesburg and East London on December 15.

Long-distance passenger train services were suspended in January because of Covid-19 and widespread vandalism along numerous routes where overhead electric power cables were stolen and stations destroyed. 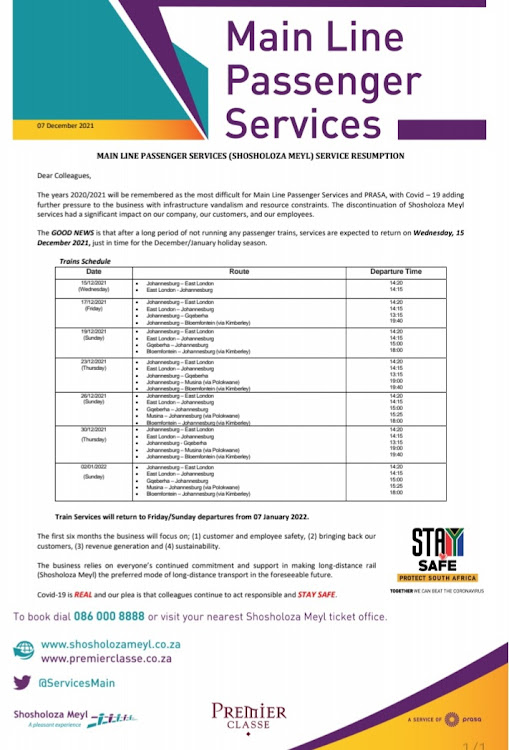 The Shosholoza Meyl timetable from December 15 to January 2
Image: Prasa

Along with the Johannesburg-East London route, services will also operate on the lines to Gqeberha, Bloemfontein via Kimberley and to Musina via Polokwane.

The first train to Gqeberha is due to depart on December 17, along with a train from Johannesburg to Bloemfontein via Kimberley.

For passengers heading from Johannesburg to Limpopo and Zimbabwe, the first train is due to depart Johannesburg for Musina on December 23.

There are no trains listed for the Johannesburg to Cape Town or Johannesburg-Durban routes.

Prasa did not say why Cape Town and Durban had been omitted from the schedule. Both corridors have been plagued by scrap metal thieves and the route west from Johannesburg's Park Station to Krugersdorp is impassable.

The Passenger Rail Agency of SA (Prasa) on Friday said it had complied with the Railway Safety Regulator’s directive for train service Shosholoza ...
News
1 year ago

A man was killed and several people were injured when a Shosholoza Meyl train collided with a goods train near Bonny Doone Road in Horizon View, ...
News
1 year ago
Next Article