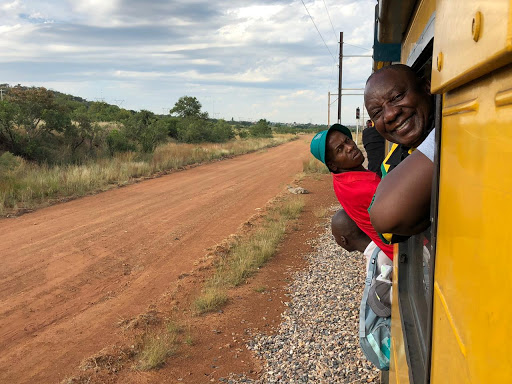 President Cyril Ramaphosa was last year stuck on a train from Mabopane, north of Pretoria. Prasa, which runs the commuter trains has lamented that poor security has hampered train services.
Image: Twitter/ANCJHB

Poor security at Passenger Rail Agency of South Africa (Prasa) has severely broken the services provided by the company to commuters.

This surfaced at a media tour held on Wednesday in which transport minister Fikile Mbalula showed how trains were torched and stripped of metal due to poor security at a train yard in Braamfontein, Johannesburg.

On December 20, trains were set alight while at the yard and later stripped. Video footage which has been collected showed people leaving the stationary train as it went up in flame that day.

The damage caused by the fire is over R50m as these were trains waiting to be refurbished and returned back to service commuters.

Since then thugs coming from an informal dwelling next to the yard have been helping themselves to all sorts of material they could get their hands on.

Train power lines have also been cut along the routes which has affected train routes in various parts of the country.

Mbalula told journalists that there were serious bad decision which have been taken by the leadership of Prasa.

“One telling example is that towards the end of last year, the interim board in its wisdom cancelled the security contracts without a contingency plan in place. This has led to untold damage to our infrastructure and rolling stock…We are losing train sets daily as the vandals target primarily the copper cables,” he said.

But it is not just security problems that have left such a crucial agency of the state in a crisis. Changes in board and management have further weakened the agency, making it a fertile ground for corruption. In the 2018/2019 financial year the auditor-general flagged irregular expenditure of R27bn.

In August last year, Mbalula established a war-room to deal with the inefficiencies in trains at Prasa in its entities – Metrorail and Shosholoza Meyl.

The  war-room mainly dealt with operational issues which have left most commuters with less train to take and in other instance no services at all.

Mbalula also removed the entire board in December and appointed an administrator to stabilise and bring normality to the entity.

Mbalula pleaded for patience while the administrator stabilises business processes and the process to appoint a new credible board is completed. This should take about a year.