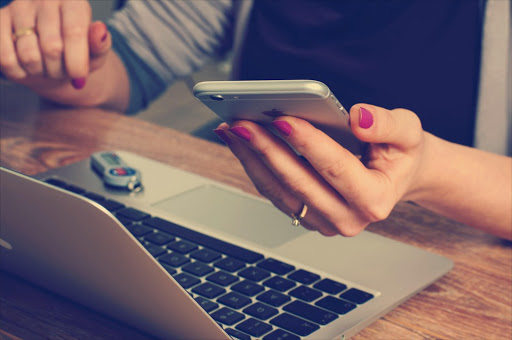 Criminality is rife in South Africa across all forms of economic crime.
Image: Free stock image/pixabay

Criminality is rife in South Africa across all forms of economic crime - there's even a special category putting us on the map of shame - “fraud committed by the consumer”.

It is the second most reported crime in South Africa at 42% and takes third place globally at 29%.

Overall‚ South African organisations continue to report the highest instances of economic crime in the world with economic crime reaching its highest level over the past decade‚ according to PwC’s biennial Global Economic Crime Survey released today.

South African organisations that have experienced economic crime is now at a "staggering" 77%‚ followed in second place by Kenya (75%)‚ and thirdly France (71%).

"With half of the top ten countries who reported economic crime coming from Africa‚ the situation at home is more than dire‚" said PwC.

Other key findings of the report include:

* Asset misappropriation continues to remain the most prevalent form of economic crime reported by 45% of respondents globally and 49% of South African respondents.

* 35% of South African respondents lost more than R1.2-million to what they regarded as the most disruptive economic crime to affect them‚ with 1% reporting losses of greater than R1.2-billion.

The PwC team also found that 19% of organisations have spent between twice and ten times as much on investigations as the original amount lost to economic crime.

The Global Economic Crime and Fraud Survey examines over 7‚200 respondents from 123 countries‚ of which 282 were from South Africa.

Trevor White PwC Partner‚ Forensic Services and South Africa Survey Leader‚ says: “ Economic crime continues to disrupt business‚ with this year’s results showing a steep incline in reported instances of economic crime. At 77% South Africa’s rate of reported economic crime remains significantly higher than the global average rate of 49%. However‚ this year saw an unprecedented growth in the global trend‚ with a 36% period-on-period increase since 2016.”

While the overall rate of economic crime reported was the highest for South Africa‚ the period-on-period rate of increase for South Africa and Africa as a whole was below that of American‚ Asian and European counterparts. From a regional perspective‚ the biggest increase in experiences of economic crime occurred in Latin America‚ where there was a 25% increase since 2016 to 53% in respondents who indicated they had experienced economic crime. The US was a close second with a 17% increase over 2016 to 54% of respondents‚ while Asia Pacific and Eastern Europe experienced increases of 16% and 14%‚ respectively. White said: “We believe that these jumps in reported crime are being driven by a heightened state of fraud awareness by respondents‚ and in this lies the silver lining.” 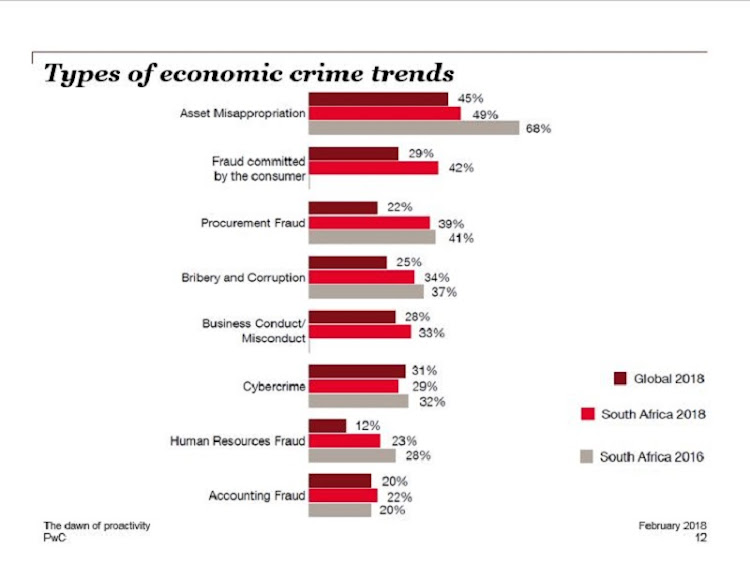 “We have seen paradigm shifts in the way that businesses are being run. Notably‚ the accountability for fraud and economic crime has moved into the executive suite‚ with the C-suite increasingly taking responsibility‚ and the fall‚ when economic crime and fraud occur. Organisations are beginning to shed their denial complex regarding the many blind spots they have in identifying fraud and are learning how to address them.”

Asset misappropriation continues to remain the most prevalent form of economic crime reported by 45% of respondents globally and 49% of South African respondents.

While instances of reported cybercrime showed a small decrease in the South African context (29% in 2018 versus 32% in 2016)‚ it retained its second place in the global rankings (31%) albeit at a lower rate of occurrence than 2016.

"One of the new categories of economic crimes was that of 'fraud committed by the consumer'. It is the second most reported crime in South Africa at 42% and takes third place globally at 29%.

"This was followed closely by procurement fraud (39% in South Africa versus 22% globally)."

The report states: "This indicates that the entire supply chain in South Africa is fraught with criminality".

When combined with the high instances of bribery and corruption reported (affecting more than a third of organisations at 34%)‚ it noted that the resultant erosion in value from the country’s gross domestic product (GDP) is "startling".

Accounting fraud‚ which is usually perpetrated by senior management and results in the largest losses‚ increased from 20% to 22%.

Cost of fraud and prevention

As awareness‚ and the profile of fraud and economic crime has risen‚ so too have investments to combat it‚ linked also to the direct financial losses reported in the past two years.

According to the survey‚ 35% of South African respondents lost more than $100‚000 (+/- R1.2 million) to what they regarded as the most disruptive economic crime to affect them‚ with 1% reporting losses of greater than $100 million (R1.2 billion).

When combined with the costs to address this issue through investigations or other interventions‚ where 41% of respondents reported having had to spend an equal or greater amount (10% reported having to spend upward of three times the amount‚ with 3% spending as much as ten times the value of the initial loss)‚ "we are faced with the damning realisation that the actual cost of these crimes is crippling the economy"‚ said White.

South African businesses continue to take measures to combat economic rimes‚ with 44% (Africa: 41%) of respondents having increased their spend on combating fraud since 2016 and 46% plan to increase their spend over the next 24 months (Africa: 45%).

"It is positive to note that almost two-thirds (64%) of South African respondents monitor whistleblower lines as a means to ensure the effectiveness of their compliance and governance programmes (Africa: 51%). This represents a 9% increase since 2016.

"It is also reassuring that business leaders are taking an active interest in their governance responsibilities and are becoming more aware of‚ or rather want to be made aware of‚ the effects and issues that economic crime and fraud have on their organisations; 95% of South African respondents (versus 91% of Global and 94% of African) said that the most disruptive incidents of economic crime were brought to the attention of the board executives or governance leaders within their organisations."

Respondents also reporting using technologies like artificial intelligence (AI) and advanced analytics as part of their efforts to combat and monitor fraud.

The survey showed that companies in emerging markets‚ including South Africa‚ are currently investing in advanced technologies at a faster rate than their counterparts in developed nations.

Trevor Hills‚ Forensic Services Leader for PwC Southern Africa‚ said: “Technology is clearly a fundamental tool in the fight against fraud‚ but it’s not the only one. Ultimately‚ when it comes to blocking that ‘last mile’ to fraud‚ the returns from investment on people initiatives are likely to far exceed those from investing in another piece of technology. Focusing on human behaviour offers the best opportunity for reducing or preventing fraud‚ because ultimately‚ machines don’t commit fraud‚ people do – they just happen to be using technology more and more in these endeavors.”

Across the board‚ regulations and reporting requirements‚ touching on both legal and ethical behaviour‚ continue to expand. There is a greater awareness and visibility on the part of organisations regarding how and why fraud occurs. The PwC team commented: "South Africa is undoubtedly undergoing far-reaching changes and visible enforcement is on the rise; 71% of local respondents expect recent changes in the geopolitical regulatory environment to have an increasing impact on their organisations in the next two years‚ and 63% of them expect more changes as regards the enforcement of regulations."

Accountability of the board

Hills said: “Accountability for fraud and economic crime has moved into the executive suite‚ with the C-Suite increasingly taking responsibility‚ and the fall‚ when economic crime and fraud occur.”

The survey showed that almost every serious incident of fraud has been brought to the attention of senior management (95%). Eighty-five percent of South African respondents indicated their organisation had a formal business ethics and compliance programme in place. In addition‚ 20% of local respondents indicated that the CEO (who is part of the first line of defence) has primary responsibility for the organisation’s ethics and compliance programmes‚ and is therefore more instrumental to the detection of fraud and the response to it.

White said: “Many companies are finding themselves caught in a tug of war between three business drivers: the market’s appetite for innovative disruptors; shareholders’ desire for financial outperformance; and society’s expectations for ethical conduct. The truth is that when businesses misbehave‚ investors often tend to look the other way as long as their investment is not threatened. The C-suite should be careful not to do the same. We often see that organisations can be easily lured into a false sense of security when scenarios appear to be rosy and when the ‘tone at the top’ appears to be consistent with the right words. What really counts is not tone at the top‚ but rather action at the top. The market may love disruptors or outperformers – but not enough to tolerate bad behaviour.”