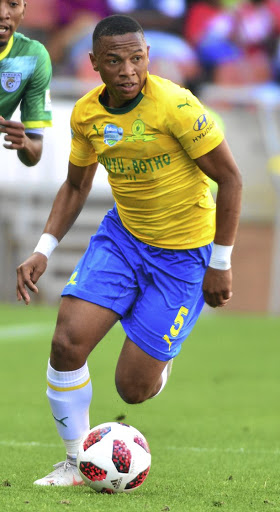 Mamelodi Sundowns midfield dynamo Andile Jali has been allegedly involved in an adulterous relationship that produced a love child with a Joburg woman..

Jali is said to have sired a baby with the businesswoman - who cannot be named to protect the child's identity - while married to his wife, Nonhle Ndala.

News that Jali fathered a child out of wedlock came to the fore when the woman dragged the talented footie to court for maintenance last Tuesday. This after Jali, who is married to Nonhle with three kids, allegedly stopped paying the maintenance.

The temperamental mega star had allegedly been maintaining the two-year-old sprog but stopped this year after his wife uncovered the news and demanded he undergo paternity tests before proceeding with the papgeld payment.

The former Orlando Pirates midfielder and the woman will face off in court next month as she insists that he is the child's father and he must continue paying maintenance.

One of the woman's relatives told Sunday World that Jali allegedly started dating her when he was playing for Bucs , noting she even joined him in Belgium in 2015 where Jali plied his trade for three years before returning to SA.

"He was living with her there and when she read in the media that he was seeing another woman, they broke up. They got back together in 2017 after he apologised and claimed he had a one-night stand with Nonhle," said the relative.

"She fell pregnant with his child in September 2017. If you take the age of his twins with Nonhle into account, it means Nonhle fell pregnant three months ealier."

The kin alleged that when Jali returned to the country to play for the Brazilians, she followed him back and their relationship remained strong, even though they were no longer sharing a home.

"When he and Nonhle fought recently after Nonhle accused him of drinking and not sleeping at home, he was sleeping at our house."

The kin alleged that the relationship between Jali and his baby mama soured when he stopped supporting the child.

"When she asked him why he was not maintaining the child anymore, he said Nonhle told him to stop because she wants the DNA tests to be conducted first to determine if he was indeed the father of the child. I guess the court would facilitate that," said the relative.

The relative added that the baby mama approached Sundowns' senior officials - including Peter Ndlovu, Yogesh Singh and coach Pitso Mosimane - in a desperate bid to force Jali to cough up but her efforts didn't bear any fruits.

"That's why she went to court," said the relative.

The baby mama declined to discuss the matter.

"As a South African citizen I have a democratic right to agree or disagree and, with due respect to your work, please be advised [that] I do not want this issue to be published," she said.

Jali and Ndala were not available for comment at the time of going to printing.