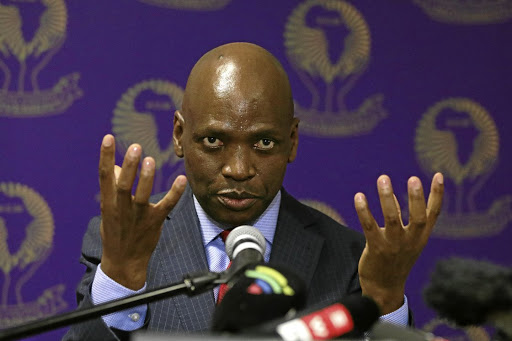 Former SABC COO Hlaudi Motsoeneng may get to give us a glimpse into his daily life. / Thulani Mbele

South African TV viewers could soon get a glimpse of the personal life of former SABC COO-turned-politician Hlaudi Motsoeneng.

Sunday World can exclusively reveal that the controversial president of the African Content Movement has been approached by a production company to lay bare his life on TV in what is said to be the first reality TV show featuring a politician.

Motsoeneng was approached in July by Keabetswe Mokoena's Prosperita Productions and is said to be entertaining the idea.

But those close to him have said he is more in favour of a documentary about his life instead of a reality TV show.

The company, it is believed, has already made a presentation to Moja Love, a channel carried on pay TV service DStv, to gauge their interest in giving Motsoeneng a platform to showcase his life now that he has failed to make it to parliament.

Motsoeneng contested the 2019 general elections with his party but failed to secure a single parliamentary seat in the National Assembly.

If concluded, the TV show will see Motsoeneng showcase his daily life.

According to those close to the politician the show would also give South Africans a glimpse into Motsoeneng's family life, including how he interacts with his daughters and other people close to him.

SABC still trying to claw back R21m from Hlaudi Motsoeneng

While former SABC chief operations officer Hlaudi Motsoeneng says the findings of a damning probe into editorial interference at the broadcaster are ...
News
2 years ago

Motsoeneng has confirmed that he was approached and is thinking about the proposal.

"Yes, I was approached by people who said they wanted to do a reality TV show with me. They said there was a channel that wanted to do the show with me. But I told them I will think about it and that is where we left it," said Motsoeneng.

Mokoena has confirmed that they approached both Moja Love and Motsoeneng to discuss the idea.

"We are still in pre-production at the moment and nothing has been finalised as yet... We are just waiting for the green light so that we can start with production.

"If confirmed, it's going to be historical because Hlaudi is going to be the first politician and executive to have a reality show," she said.

Mokoena further said that there was a huge interest from South Africans in Motsoeneng as an individual, given his colourful life.

"People want to know whether Motsoeneng wears pyjamas, what he eats for breakfast, lunch, and generally what he gets up to from the morning ," said Mokoena.

She said they would give an update on the planned reality show in a week.

Moja Love channel head Bokani Moyo confirmed that the channel was interested in the reality show but said discussions with the production company were ongoing.