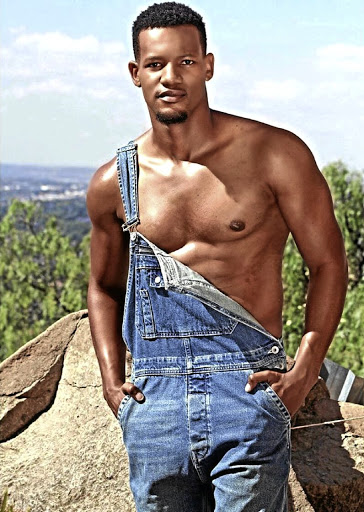 One of Mzansi's hottest and most sought-after hunks Khumbulani "Kay" Sibiya was dealt a double blow when two sets of tsotsis robbed him of his cellphone and money within three days.

The actor was first robbed of his iPhone at gunpoint by thugs outside his townhouse complex in Joburg north.

Sibiya, 30, known for his role as Ayanda Mdletshe on SABC1 soapie Uzalo and as Kwanele on Mzansi Magic telenovela The Queen, opened a case of robbery at the Douglasdale police station on March 8.

Three days later, the actor, who leaves "oohs!" and "aahs!" at public gatherings as women gasp over his chiseled 6-pack, was back at the same cop shop opening a case of fraud.

Sibiya told officers that after he lost his cellphone in the armed robbery, he tried to buy another one through online market place OLX but was instead swindled of his R4 000.

According to a statement he gave to the police following the robbery, the thugs sped off after the incident.

"Victim alleged that on Friday March, 8, at about 01:55am, he was sitting next to his complex when he saw a silver grey Hyundai Getz approach and park close by. He said the back and front windows were opened and the occupants cocked and pointed a firearm at him and they demanded his iPhone. He said he threw it down and the driver came out of the motor vehicle and took it. After that they drove away.

"After some few minutes they came back and demanded the PIN code and password.

"They asked him to come closer and [that] was when they took his headsets and after that they drove away. The victim said he didn't took out (sic) the registration number.

Tsotsi pounced on her at robots.
News
3 years ago

"The cellphone costs [about[ R13 500 and it's not insured nor blacklisted. Further investigation needed," reads the statement.

About the fraud case, Sibiya said the crooks made off with his money without delivering the cellphone.

"Complainant alleged that he deposited the money to buy the cellphone that was advertised on OLX. He said after depositing the money he didn't get hold of the advertiser by the name of Nkosinathi Ndhlovu with cell no: [number withheld]. The complainant said he deposited R4 000. Further investigation needed," reads the statement.

Police spokesperson Takalani Matumba confirmed that a case of robbery was opened.

"The case of robbery is still under investigation and no arrests have been made. The victim confirmed that he saw three suspects in a vehicle, however, we are not sure if there was another suspect in the car.

"The case of fraud that happened on March 11 is still under investigation and, according to the victim, two suspects were involved," said Matumba.

Matumba said no arrests have been made at this stage.

However, Sibiya, who was nominated as Mzansi's Sexiest Man in 2016, denied that he was a victim of crime.