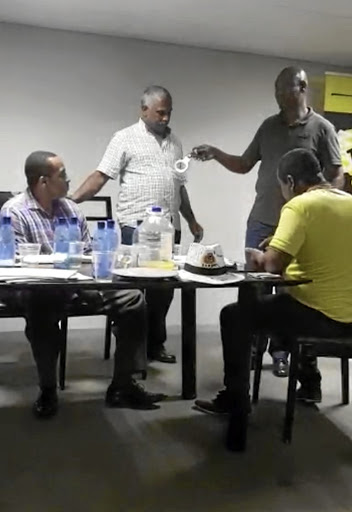 The incident happened during Sanco's national working committee meeting in Alexandra, Joburg, that preceded its elective conference scheduled to take place yesterday in the same venue.

Sunday World saw video footage in which two plain-clothed police officers attempt to handcuff Mdakane but fail to do so as he resists.

Some of his Sanco colleagues helped him resist arrest and they could be seen and heard arguing with the two officers in the boardroom.

Police have now urged the pair to hand themselves in.

"The individuals concerned as well as their attorney have been informed of the charges and that the Durban Magistrate's Court has issued a warrant for their arrest. We are appealing to them to hand themselves over so that they can be placed before court to answer to the allegations made against them," said Naicker.

Mdakane and Mpanza have been accused by Sanco's Eastern Cape provincial leader Zukile Luyenge of squandering about R3m geared towards the organisation's skills development fund.

Luyenge, who is also an ANC MP, said the pair should be apprehended for "looting Sanco's funds".

"They are corrupt, therefore, we cannot have such leadership within the organisation. Roy Moodley, our treasurer, has exposed their shenanigans, therefore, they must relinquish power.

Bushiri to meet Sanco as pressure mounts on him to go

The Commission for the Promotion and Protection of Cultural, Religious and Linguistic Communities (CRL) will be facilitating talks between the SA ...
News
2 years ago

"They think that they are above the law. How can they refuse to be arrested? I put it to you that even today [yesterday] during the conference they have surrounded themselves with bodyguards who are intimidating the police. They aren't above the law. This will send a wrong precedence that there are those that are above the law," said Luyenge.

Speaking on behalf of himself and Mdakane, Mpanza labelled the arrests political pointscoring orchestrated by Luyenge and his ally Moodley. "Those comrades have an agenda and we are aware of that. We are questioning the manner in which those police invaded our meeting. We will not allow police to be used by Lunyenge and Moodley who resigned as the treasurer.

"We are saying we are not going to be bullied. Those police have not engaged the police in Alexandra, including the provincial leadership of the police about their intention to arrest us. They must follow proper procedures," he said.

Mdakane said he was unfazed by the warrant of arrests issued against him and his general secretary.

"This national conference will go ahead. Those who are plotting against us will not succeed. Their mission is meant to disband this conference from going ahead. We are not intimidated by anybody, including the police," he said.