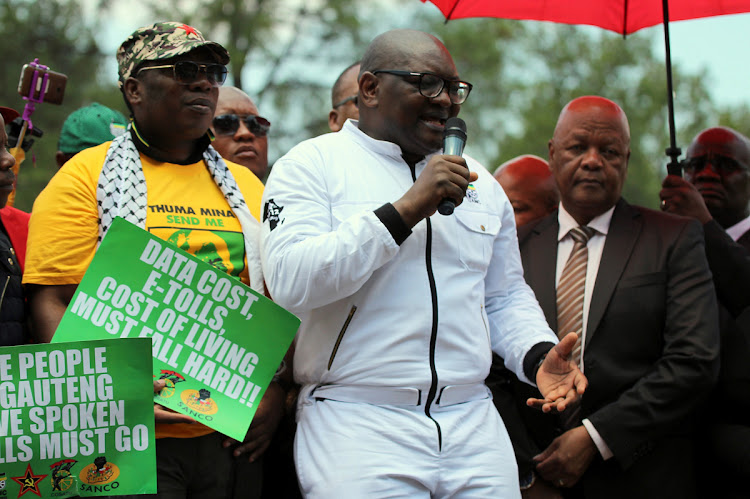 People are gatvol of e-tolls and they should be scrapped.

That was one of the demands of the ANC and others to the government in a memorandum delivered at the Union Buildings in Pretoria on Friday.

Gauteng premier David Makhura called for e-tolls to be scrapped‚ saying that living costs have become “really expensive” and that all South Africans were affected.

“For us‚ as the ANC‚ e-tolls are a cost-of-living issue‚” Makhura said. “We have to find a very different set of options than living people are going to be forced to pay. For many people‚ it is not because they are defiant. They can’t make ends meet… We can’t keep calling on people to dig deeper and deeper into their pockets. They have no pockets left.”

“Government remains committed to the user-pay principle because it is the most efficient and effective way to ensure that the direct benefits of services are paid for by those who use them.”

Cosatu to embark on stayaway against e-tolls

The Congress of South African Trade Unions in Gauteng will embark on a stayaway on Friday to protest against e-tolls and they will deliver a ...
News
3 years ago

But Makhura disagreed when asked if there were mixed messages from the governing party and government. “Government tends to take positions based on a whole range of issues. That’s why we as the ANC are taking up this matter as the ANC structures with our [country’s] president.”

About 1‚500 members of the ANC‚ Cosatu‚ the SACP‚ the South African National Civics Organisation (Sanco) and others marched from Burgers Park to the seat of government.

Energy minister Jeff Radebe accepted the memorandum on behalf of the government. The memo also asked for data costs to drop‚ no further VAT increases and the halting fuel prices hikes.

Templeton Gantle‚ 50‚ from Tembisa‚ said that South Africans got nothing from e-tolls.

Thandi Nhleko‚ 59‚ from Soweto‚ said rising fuel prices and e-tolls were impoverishing her.

“I can’t cut anything (in costs) because I’m unemployed. I don’t get any money… I’ve got children who are still in school. I can’t support them. I’ve got a big challenge.”

Olivia Masinga from Phumla Mqashi‚ south of Johannesburg‚ also called for e-tolls to be scrapped and asked for better service delivery. “We need a street. We don’t have a road where we live.”