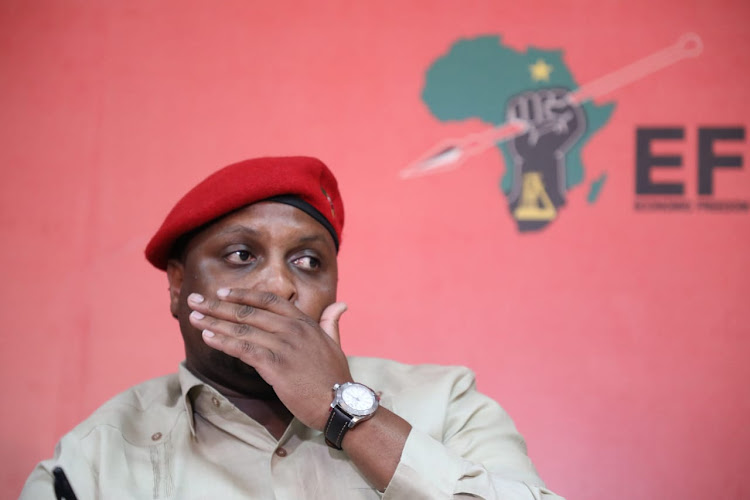 However, the incident has become shrouded in secrecy, with no police case registered, nor a complaint registered by the security company guarding Shivambu's luxurious townhouse complex.

Sunday World can reveal that Shivambu's swanky Fourways apartment at Pine Avon complex was broken into by rogue elements who only stole two laptops, two cellphones and valuable documents.

Shockingly, according to sources close to the EFF leader, the same thugs called Shivambu the next day asking him if he had noticed that they had "visited" his apartment.

One source said Shivambu only believed their story after they told him to check his whiskies, telling him that they had drinks on his cosy couch after helping themselves to a few of his Scotches.

"This is not the first time there was a break-in at that apartment. The same people broke into the house last year but never took anything. The boys are being targeted and that's why they increased their security," said the source.

Shivambu reluctantly confirmed the incident to Sunday World, stating that he also reported the matter to the police.

"I really don't think that I want to deal with this matter publicly. Otherwise we would have made it known when it happened. We deal with issues differently," he said.

Earlier, however, Shivambu told Sunday World that his house had been broken into, saying the thugs only took two laptops, two cellphones and documents. "I was surprised that they didn't take my wife's jewellery and my watches or anything else that's valuable. They also destroyed my security system," he said.

The EFF leader said the thugs appeared to want to demonstrate that "we can find you when we want to".

Shivambu said he reported the matter to the police, who were puzzled by the theft.

"They said the incident was not a normal break-in or robbery," he said.

A security guard at Shivambu's complex told Sunday World that no incident had been reported to them about a break-in at Shivambu's place.

He confirmed that Shivambu was already living there when he joined the company and was posted to the complex.

"If there was such a break in, we would have known about it because we are the first people residents talk to when there's such incidents," said the guard.

He added that Shivambu was not often at the apartment and showed up during weekends.

"We only see him during weekends and sometimes once during weekdays," said the guard, who asked not to be named.

Douglasdale police spokesperson Bertha Kgasoane said she could not locate any case docket opened by Shivambu at their station in relation to the break-in. This is despite the fact that Shivambu's apartment is located within the jurisdiction of the police station.

A Scorpio investigation has directly linked Julius Malema and the EFF to the looting of billions at VBS Mutual Bank.
News
3 years ago

Media houses accused of bias.
News
3 years ago
Next Article