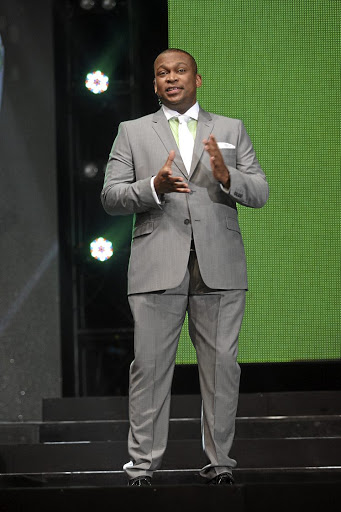 Robert Marawa is back at the SABC with a mega-buck salary.
Image: Veli Nhlapo

The SABC had to bend over backwards to bring back radio darling Robert Marawa in a three-year deal worth more than R5-million.

Marawa's comeback was announced on Friday morning by SABC COO Chris Maroleng, with a historic plan to simulcast his sports show on Metro FM and Radio 2000.

Sunday World can exclusively reveal that Marawa signed a three-year deal with the public broadcaster effective from June 1 2018 to May 31 2021 at a rate of R7000 per shift. The show will take two hours.

According to a contract of employment signed by Marawa and the SABC, and seen by the Sunday World, Marawa is set to become the second highest paid sports radio presenter at the SABC with a monthly salary of R154000.

The contract indicates that Marawa is set to earn an annual salary of R1.8-million and, by the end of his contract, he would have earned at least R5.5-million.

Marawa's predecessor at Radio 2000, Andile Ncube, is believed to have earned R7500 for his one-hour sports show.

SABC spokesman Kaizer Kganyago said: "Employees's salaries are confidential and we cannot speak about them in public."

Ncube had not responded to questions sent to him at the time of going to print.

The SABC will announce the return of popular sportscaster Robert Marawa to the public broadcaster's radio airwaves at an internal event to be held at ...
Sport
4 years ago

Mlambo, who walked out on Friday when Marawa was introduced during a staff meeting at the SABC, was the fifth presenter for the Metro FM sports show since Marawa's departure in the middle of last year.

Others who came and failed to make an impact include the likes of Mpho Maboi, Udo Carlese, Joe Mann and Owen Hannie.

Despite Marawa receiving a thunderous welcome from the majority of SABC staffers, Sunday World can reveal that his comeback was not easy.

It has been established, through several SABC officials close to the process, that there were contractual glitches that delayed the process.

Marawa confirmed the contractual hiccups, but said he was glad everything was sorted out to allow his comeback.

Marawa told Sunday World only that he was approached by the SABC to come through and do the show.

"My role is literally to try to make sure the vision the SABC has with this kind of format works," he said.

The sports broadcaster, who is also a presenter at SuperSport, credited listeners and his fans for his return to the SABC.

"I have been sitting on the sidelines not doing any radio whatsoever and because it's a national platform as well, there was no way you can say no to talking to the masses across all different provinces in the country.

"We look forward to a unique show and hope that the people will participate, be interactive and aggressively tackle the issues we have in this country when it comes to sports transformation and so forth. We look forward to the journey moving forward with both Metro FM and Radio 2000," said Marawa.

Twitter reacts to Robert Marawa's return to the airwaves

Robert Marawa is back at the SABC and will host two radio sports shows in a historic simulcast broadcast.
Sport
4 years ago

Speaking about a botch-up announcement made earlier this year by SABC on their website about his appointment as sports presenter for Radio 2000, which never materialised, Marawa said the public broadcaster had not consulted with him.

"We had spoken about the idea but we had not agreed on anything yet. I was also shocked to see my picture and name on their website confirming me as their new sports presenter," said Marawa.

When asked how he had utilised his year-long break from radio, Marawa said he had used the opportunity to spend more time with his son.

"But I must admit I missed being on radio," he said.

Marawa, who was dismissed in late 2016 after complaining about interference by top management, said he was ready to toe the line and report to the same structure he had denounced previously.