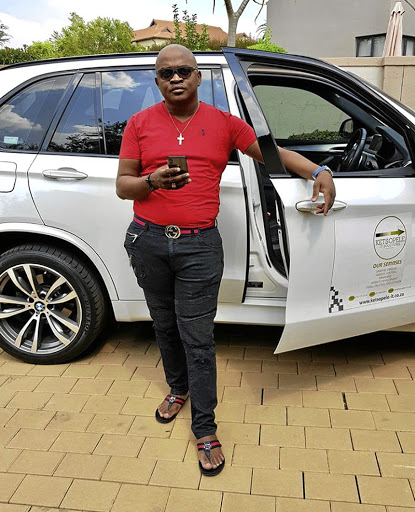 Nico Matlala is being accused by an ex-girlfriend of refusing to pay back the money she lent him in 2013.

Celebrity casanova and controversial businessman Nico Matlala is once again the subject of allegations of a scam by one of his ex-girlfriends claiming he made off with her hard-earned cash.

The latest alleged victim, Sello Ledwaba, is a banker from Matlala's hometown of Polokwane, Limpopo, but based in Pretoria.

Ledwaba claims that Matlala did not only leave her with a bleeding heart but left her purse with a R140000 hole after he borrowed money from her to use towards his construction business.

"He came to me in 2013 and mentioned that he has a construction company and that he needed the money because he was not paid by his clients. Coming from the same city with me, I didn't go into details, not even to request a copy of the contract.

"I lent him the money before we started dating. But our relationship didn't last long because I discovered more lies from him when I started to demand my money back," she said.

Matlala denied all allegations against him and said he doesn't know Ledwaba.

"If I owed someone money from years ago, why are they only coming out now? Is it because I am famous? Also, you the media, when you want to sell your papers you think of Nico. I will sue you. I have good things that I am doing but you people don't talk about them."

Ledwaba said she was coming out after five years because she had run out of patience withMatlala's empty promises and had also seen how he allegedly conned other women.

"I have been talking to Matlala since 2014 asking him to pay me back, he has been prolonging but now I want my money back," said Ledwaba.

Sunday World has seen a Facebook inbox where Ledwaba and Matlala were exchanging messages. In their conversation, Ledwaba sent Matlala a biblical quote about borrowing and paying which Matlala responded to with an "Amen" and requested Ledwaba's "numbers".

The conversation shows that she sent him her bank account number but Matlala asked for her cellphone number.

Ledwaba said she was financially crippled because she had to take out a loan to help Matlala and was now liable for paying back the bank.

She said she took the matter to her lawyers to force Matlala to cough up but there had not been any progress.

"Matlala has not been responding to my lawyers' e-mails and we couldn't continue with the matter by issuing summons to Matlala because the lawyers need more money to draft the summons and I am broke," she said.

Sunday World has seen some proof of payment receipts showing that money was transferred from Ledwaba's bank account into an account she said was Matlala's .

When Sunday World called the bank to verify the account, it said the account had since been closed and the bank could not trace who it belonged to.

Ledwaba was not the first woman to fall victim of the notorious womaniser and alleged con man.

In January, Tshwane businesswoman Millicent Kgwale opened a case at Norkem Park police station in Kempton Park where she said Matlala conned her of R135000 to pay lobola for his ex-fiancee Lebohang Mabe in August last year.

Kgwale also said she took out a loan to invest in what Matlala said was a new multi-million project to instal fibre optic cables only to see social media abuzz with Matlala's lobola news.