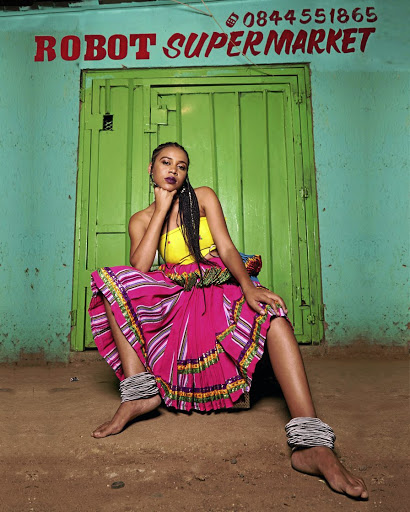 Since bursting onto the scene with her Dumi hi Phone - Xitsonga rapper Sho Madjozi has not only made her culture and language trendy, she has become a huge influencer in the fashion stakes.

The rapper is proudly African as she pairs her brightly coloured traditional skirt, xibelani, with snazzy sneakers, bold make-up and trendy braids with dangling sides. Many are following her lead, which has convinced the Huku hitmaker to start her own fashion line.

"People love to do the styles I do. It's cool. My style is Tracksuit Mafia with a touch of Tsonga Princess. I will unveil the fashion line after the Global Citizen Festival in New York City where I get to perform alongside Cardi B, Janet Jackson, John Legend and a few others.

"It's an incredible opportunity. My album will follow shortly afterwards. This trip keeps getting more exciting and I'm grateful to the fans whose support make it possible. We're going to do the most."

The catchy tune Huku has become the hit of the spring season and is on high rotation everywhere. She says what's more exciting is that the complete album, which drops at the end of October, is even more lit.

"Huku, sung in Swahili, is the first single from that album called Limpopo Champion's League, which is a collection of all the things I like. There are Tsonga vibes, gqom vibes and Afritrap vibes."

She says this album is about showing people who Sho Madjozi really is, showing people what Limpopo has to offer and about living her best life. "Every time I play the album for my friends it becomes a party, so I'm very excited to share it with my fans."

She is revelling in her new-found fame. "I enjoy it. It's allowing me to do all the other things I've wanted to do. Like giving back and inspiring people."

In a nutshell, she describes herself as someone who loves chilled music, reading, road trips and waterfalls.

But she acknowledges that she has contributed tremendously in making it vibey and cool to be Tsonga.

The 26-year-old says she wants to see her name in lights - not really internationally - but in the rest of Africa like in Kenya, Ivory Coast and Mali.

The rapper from Elim outside Louis Trichardt says she has been receiving plenty of requests to perform her Pan-African music overseas.

Raised at Shirley village in Waterval, she moved to Pretoria and then to Dar es Salaam, Tanzania, where she was fondly known as Majozi.

The name was given to her by cousins because of her resemblance to Vivian Majozi (Faye Peters) of Generations fame. "I added the 'Sho' and the 'D'," she says.

She then went on to do African studies and creative writing at Mount Holyoke College in the US. She started off as a writer and gradually gravitated toward poetry and rap music. "I'm obsessed with words. I grew up to the sounds of Oliver Mtukudzi, Sade, the Fugees and Kanda Bongo Man. As for rapping in Xitsonga, I'm just like everyone else. I want to express myself in my own language. No one asks why Beyonce sings in English. That's her language. Xitsonga and Kiswahili are mine."

Sho sneaked on stage and gave it the most.
Shwashwi
3 years ago
Next Article