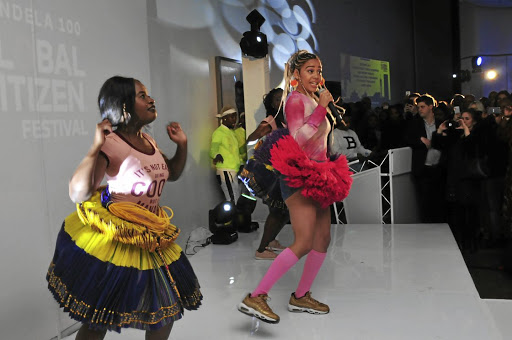 SA musician Sho Madjozi was 'kicked off' stage at an Afropunk Festival after-party held in Brooklyn‚ USA‚ after sneaking past security to twerk near the DJ booth.

The Huku hitmaker was in town to perform at the festival and after a high-performance set decided to unwind at DJ Kaytranada's after-party.

But as the night got more and more lit‚ Sho sneaked on stage and gave it the most. Until security came over and confronted her.

#TheBackRoom🚪🔑 the Huku Hit maker #Shomajozi had the organizers of #AfroPunk sending security to take her off stage at the #KayTranada #AfroPunk after-party in Brooklyn. She randomly decided to jump onto stage to do the most up until security was asked to escort her off stage. Watch 👀

"I need you to understand how I was doing the most. They tried to kick me off multiple times but‚ seriously‚ I was doing a lot‚" she told her fans on Instagram Live.

Eventually security came and kicked her off stage while she was twerking on the DJ booth‚ but not before the crowd booed the bouncer.

To seal the deal she got a snap with Tyler‚ The Creator.

That Sho Madjozi reign just won’t let up.
Entertainment
3 years ago
Next Article