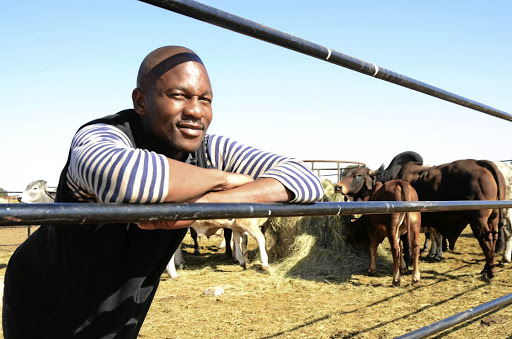 For footballers in Mzansi there is no bigger insult than being called inkomo.

The colloquial term, meaning a cow, is used to refer to a fumbler, who is not very good at football.

But for Gift Sithole the refrain is a term of endearment. His face lights up when he hears it as it reminds him of his own cows.

The veteran defender, 35, farms cattle, sheep and goats - roughly 120 beasts - at his farm on the outskirts of Benoni on the East Rand.

"I got into farming about four years ago, after I was inspired by a cousin of mine and I wanted to do something outside of football," said Sithole.

"Once I got started, I was hooked and now farming is something I have a passion for. It is something that requires someone who is not afraid of hard work but I love it."

Sithole admits that farming is not only about land but also having the necessary financial resources.

"To farm successfully you need a number of things but of course funding is crucial. A person also needs the knowledge about what you are farming," he added.

"It can be a very profitable business. Land is just one factor, there are others that are also very important."

The Tembisa-born athlete will decide his future in the coming weeks after his relegation club Platinum Stars changed its name to Cape Umoya United and relocated to the Mother City.

Sithole also has a passion for social development in his community and wants to inspire the youth to focus on their education.

"I want to help people better themselves. I want to grow my business so that I can employ more young people.

"I wish that kids in townships wouldn't only focus on football but also take school seriously because it's not all of them who will go on to have careers as footballers."

Links is learning Arabic and has sights on Europe.
Sport
3 years ago
Next Article