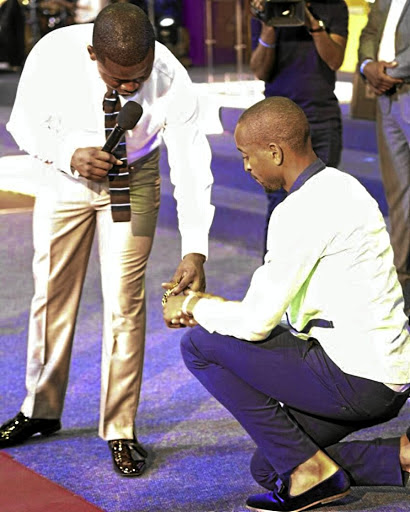 Mamelodi Sundowns defender and staunch supporter of Prophet Shepherd Bushiri's church Enlightened Christian Gathering, Tiyani Mabunda, said he was indebted to the prophet because he rescued his soccer career with prayers.

Mabunda, 30, was under fire on Twitter last week when his followers questioned his consistent appreciation of Bushiri during his Man of the Match award acceptance speeches live on TV.

However, what people don't know, according to Mabunda, is that before he became a regular in the starting line-up, he had only played a cumulative of 20 minutes in three seasons for Sundowns. He said his career was facing early termination as he also suffered endless injuries. He was loaned out to Free State Stars.

"But all that changed after I visited Prophet Bushiri in 2015. I was taken to the church by my fiance because things were not going well for me. It was on the 17th of April 2015. I remember very well because it was on my birthday," Mabunda said.

"I had lost hope and was beginning to believe that my football career was over because I was told by the club's four doctors that I had to undergo surgery for a groin injury and there was no guarantee that I would play football again," said Mabunda.

Mamelodi Sundowns midfielder Tiyani Mabunda has set tongues wagging after he paid homage to the controversial prophet Shepherd Bushiri during a man ...
Sport
4 years ago

Mabunda said at the time he went to church, some family members, friends and supporters had advised him to visit a witch-doctor for intervention.

He revealed that while at the church, Bushiri, popularly known as Major One, prayed for him and assured him that if he believed that God would help him, in few days he would be joining the first team and would start playing regularly at Sundowns.

"I believed... the next day I was training with the first team," he said. He said because of what Bushiri had done for him, he even thought the Malawian preacher had come to the country specifically for him.

"I have come to know and understand God under his leadership. It was through his teachings, prayers and wellwishes for me that I was able to get to this level in life."

Mabunda, who joined Sundowns from Black Leopards in 2013, dismissed comments on Twitter that he was worshiping Bushiri as if he were a cult leader.

"As I speak to you, I have won the CAF Champions League with my team, won Man of the Match awards countless times and won the Absa Premiership and I'm part of the first team to play Barcelona today (Wednesday at the FNB Stadium).

"Those people know nothing about my life struggles ... I'm talking today as a man whose life has changed drastically for the better spiritually, financially and otherwise."

Bushiri said: "It is a great moment to see him becoming big and watch him having his career rejuvenated.

"I know him as a great worshiper who does not hide his identity in Christ. I am so pleased to see him appreciate our prayers; many people do not appreciate the fact that a certain man of God once stood with them in prayer."

Prophets agree to stop crucifying each other.
News
4 years ago
Next Article