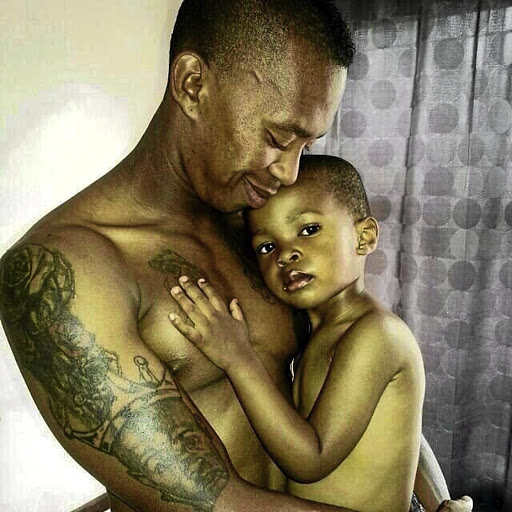 Vuyo Mere, with his son Olwethu, has come a long way from his days as a party animal.

Vuyo Mere's tattooed body makes him one of the most recognisable footballers in Mzansi.

The defender has over the past few years turned his body into a canvas of artwork drawn in indelible ink.

The 34-year-old has a fascination with artistic works.

"My tattoos represent a bit of what I have been through in life and they have a special meaning," Mere said.

"I have had many ups and downs in my career and I have done a lot of growing up over the past few years.

"After I got my first tattoo, I got another one, and then another again, and today they are part of who I am."

Mere disagrees that tattoos are associated with "bad boys".

"I think there are people who stereotype people with tattoos but there is nothing bad about them. That's an old mentality and way of thinking."

Mabunda thanks preacher for his blessings.
News
3 years ago

The Platinum Stars skipper has not always been the model citizen that he is today. Mere has turned his life around and is now a husband to Busi and the father of a boy.

He describes himself as a committed family man.

"There is a big difference between who I was and who I am now. I have grown a lot spiritually and I am on the right path where God wanted me to be.

"My family means everything to me. Everything I do I do for them."

Mere is a winner despite the relegation of his club Platinum Stars to the National First Division (NFD).

Having transcended the fast-paced life of partying and drinking, he has won a bigger battle that goes over and beyond football at the Phokeng club.

"I owe a lot to this club because they took me in when nobody was willing to give me a chance so I will not just desert the team.

"I will hear from the club, if they want me to stay then I will stay." he said.