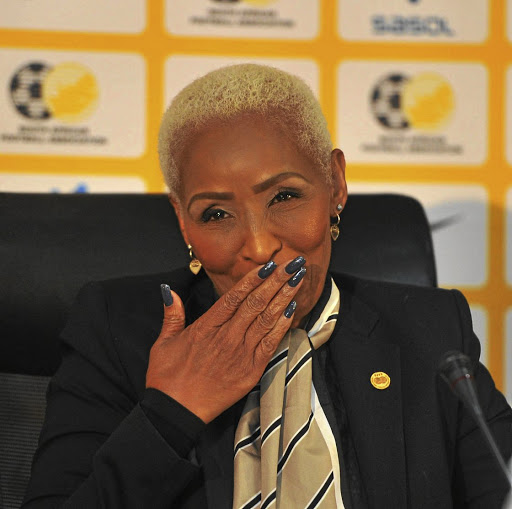 Ria Ledwaba says her new role as Safa vice-president is just the beginning for women in the soccer fraternity.
Image: Sydney Mahlangu/BackpagePix

Ria Ledwaba is unapologetic about making strides in the football industry, supporting Danny Jordaan and sticking to her little blonde crop.

With hardly a month in office as the first woman vice-president for the SA Football Association (Safa), Ledwaba says this appointment is only the "beginning" for women in this country.

"My appointment is a huge victory not just for myself but for all the women in the football fraternity.

"We've not seen women come up in positions of power and there are plenty of us. It's time to choose women, it's not an easy task but it is time."

In the same breath, Ledwaba is firmly sticking to her guns on backing Jordaan amid calls by gender activists that the Safa boss should be suspended following allegations of rape.

Jordaan has for the past year been under public scrutiny after former ANC MP and musician Jennifer Ferguson opened a rape case against him.

Axed DA mayor of Cape Town knew early in life she had a fighting spirit.
Lifestyle
4 years ago

Jordaan was re-elected president of Safa last month, within a week of another woman opening a similar case against him. Ledwaba believes it is not her place nor the public's to judge, but that the law should take its course.

"Let us not allow the media or [the] public to interfere or [to] judge," says the businesswoman who once owned a football club, Ria Stars, adding that she is all about the game.

And although South Africa did not qualify for the World Cup, she is excited to watch the games and support the other African countries during the tournament which kicked off on Thursday in Russia.

"I'm behind all the other African teams that qualified. I'm looking forward to seeing them raise the African flag."

She's more excited about the girl's under-17 representing the country in Uruguay, noting that they are focusing on getting them ready to compete.

"We need to prepare the girls as they are behind compared to the European teams. I'm, however, very proud of them and we are not going there to add to the numbers. We are going to compete."

She has plans of one day owning a football club again and explains that growing up in a household full of boys and being the last born and only girl, the football bug was definitely going to bite her.

SA's own Whitney Houston, Belinda Davids, has become a global sensation. But she says there's a whole lot that goes into the tribute act than just ...
Lifestyle
4 years ago

Although she's a lover of football she has never played the sport. She actually played basketball but followed her four older brothers to their soccer tournaments.

She says even her mother, Sebotsana Rasebotsa, a veteran Limpopo nurse who is 102 years old, is a staunch Kaizer Chiefs supporter. Having kept her blonde crop for decades, she still maintains a certain youthful look.

"It's who I am. I can't remember a time I didn't have blonde hair. I'm sticking with it for years to come."

She agrees that she has that youthful spark and says: "One must keep feeding the mind, body and soul positively."

SA's own Whitney Houston, Belinda Davids, has become a global sensation. But she says there's a whole lot that goes into the tribute act than just ...
Lifestyle
4 years ago
Next Article