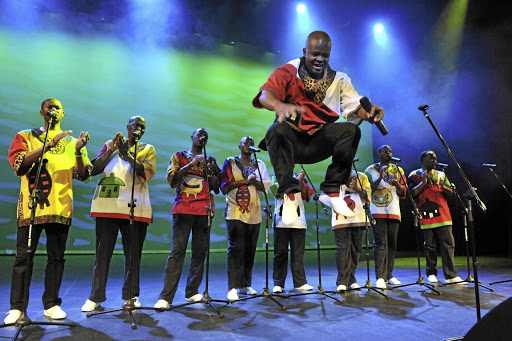 Sibongiseni Shabalala has managed to keep up the legendary status of the award-winning gem his dad Joseph Shabalala started more than 50 years ago.

And although they continue to bring home Grammys and other accolades, Ladysmith Black Mambazo is more proud to be celebrating Madiba's memory.

Nelson Mandela referred to the all-male a cappella group who perform a traditional Zulu style of harmony-driven singing and dancing known as isicathamiya, as SA's cultural ambassadors. Shabalala says it's no secret that the band was one of, if not the late president's favourite groups.

They are the headline act at the Bassline Fest, "Africa's Tribute To Madiba", next Saturday.

"There is a song called Long Walk to Freedom that my father wrote when we accompanied Tata to Oslo (Norway) when he was receiving his Nobel Peace Prize. We will definitely sing that song and many more that our fans like. It's going to be a real celebration, we will be dancing Madiba-style.

"We will also have our own celebration in his memory at the Durban Botanical Gardens in December," said Shabalala.

"I was very lucky because when I joined the group in 1993, my first performance was at Madiba's birthday party in Joburg. It was a very humbling experience.

"You can imagine growing up hearing stories about this great man who sacrificed his life for our freedom and went to jail for 27 years, and there he was standing in front of us, something I never thought would happen. After that he invited us to Oslo for the Nobel Peace Prize, and then to his inauguration," he said.

"After that we were invited almost everywhere he went, because that is what he said when he spoke and shook our hands on his birthday in 1993, that the music of Ladysmith Black Mambazo had been a great inspiration for him when he was in jail. Tata wanted us to accompany him everywhere he went to show the world our good work."

That Somizi reign just won’t let up.
Entertainment
3 years ago

Shabalala also speaks in awe of his father, who first worked as a farmer in the Ladysmith area of KwaZulu-Natal.

He said it is only natural that he is following and continuing his legacy.

"My father always said that one day he would like to see us continue with the group when he and the older members retired. But it seemed impossible at the time because we were still young," Shabalala said.

"But now I have realised that if we spend time with our kids and show them what we do, it is easy for them to learn from us.

"I see that with my kids. They sing and do Zulu dances because they see me doing it ... when I bring them to the shows and rehearsals. Something gets planted in them and they learn to appreciate the music and the culture.

"I recall a few years back, my dad and the group would gather at home and rehearse and involve us. And sometimes we would attend their shows when they performed nearby. While at home, my father was always singing and composing songs. And every time he had a new song, he sang for us.

"Sometimes he would wake us up in the middle of night to teach us a new song," Shabalala remembered fondly.

He took over the reins when his dad retired five years ago and has since held the group together.

Shabalala said they are blessed that two of the original members, Albert Mazibuko and his brother Abednego Mazibuko, still remain, keeping the authentic sound they started that made them worldwide icons.

Shaka Zulu Revisited won them their fifth Grammy earlier this year. Shabalala said they relaunched this particular album to celebrate its 30th anniversary and as a tribute to Joseph as it was the one that won them their very first Grammy in 1987.

"We wanted to honour our father and the past members of the group for keeping this music alive. Winning it again means a lot of things but most importantly assures us that people accept us as the new voices of Ladysmith Black Mambazo as this is our first album without my father's voice leading," he said.

But what is the secret to staying relevant still?

Shabalala said it's simple: "The secret is to love what you do - this means you think about the music before you think about what you gonna get. Respect yourself, your colleagues and your fans."

And he is more than confident that the group will continue for the next 50 years.

"Fifty years from now and 50 years after I retire. Beyond that, it will be up to our great-grandchildren.

"We would like the group to go on forever because it is no longer about us the Shabalalas and the Mazibukos who formed the group, it is a South African group that all Africans are proud of."